Charles writes: "I have a question about Karate, is it considered New Age? Many people send their children to Karate for discipline, confidence, and self-esteem and they say it helps them so much!  What are your thoughts on this?" 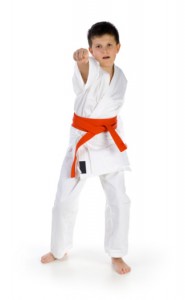 Excellent question and one that I'm often asked about!

Aikido means "the way to union with the universal force", with this force being known as "chi." Christians do not believe in, nor does science support, the concept of a "universal force" so a practitioner of Aikido is ultimately uniting himself or herself with a false god.

Ninjitsu is another form that is not compatible with Christianity. As Prof. Oropeza describes: "The Ninja tries to assimilate himself with nature in order to be more stealthy, and has a pantheistic worldview which believes all is God. The Christian believes that God is not the universe, but the Creator of the universe (Gen. 1:1-2)"

Tai Chi is off-limits because it involves the practice of Taoism. "In order to achieve physical well being, the Tai Chi student must be attuned to the universe by concentrating below the navel section of the body - which is said to be the body's psychic center," Prof. Oropeza writes. "Tai Chi cannot be reconciled with Christianity."

Karate, on the other hand, requires meditation, which usually involves emptying the mind of distractions. "It is at this point that Karate becomes spiritually dangerous," Prof. Oropeza writes, but adds that since karate is primarily a physical martial art, the meditation aspect can be divorced from it.

Herein lies the "rub" when it comes to fitness regimes that have eastern roots. The spiritual aspects can be divorced from the practice, but are they? Is it enough that the non-Christian element may - or may not be - left out? Is it wise to leave so much up to the whim of an instructor?

For the most part, we're on our own when it comes to discernment in these classes. Are we up to the task? Are we well-armed and well-practiced in our faith?

It's no secret that the last two generations of Americans are not very well catechized. This means that the average person entering a fitness/martial arts class probably can't name the three theological virtues let alone distinguish between an eastern and a Christian meditation technique. Spiritually speaking, they probably are not developed enough to make the kind of distinctions they need to make in order to safely navigate these courses.

Not that we're "talking down" to anyone. We're just being realistic when we admit this. But more importantly, we're being charitable. Scripture teaches us to respect where other people are in their faith and to be willing to meet them on their own level, not our own (Romans 15).

Do you have a question about the New Age? Send it to us newage@womenofgrace.com and we'll post the answer right here on this blog!