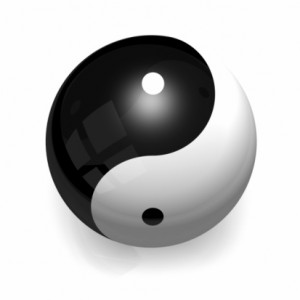 Note: This blog was reviewed and updated in June, 2020

Maria asks: "Is eating a macrobiotic diet new age?  I noticed it talks a lot about ying and yang in the cookbooks."

The reason macrobiotic cookbooks mention yin and yang so much is because this diet was created to "balance" these opposing forces or energies a belief common to Taosim. This belief is not compatible with Christianity.

Macrobiotics (the word means "way of long life") is described by experts as a "quasireligious philosophical system" that advocates a semi-vegetarian diet comprised of whole grains,vegetables, whole beans or soybean-based products, nuts and seeds, miso soup, herbal teas, and small amounts of white meat or seafood once or twice weekly.

Some macrobiotic diets contain adequate amounts of nutrients, but others do not.

But none of this is surprising when you consider the source. Christoph Wilhelm Hufeland (1762 - 1836), considered to be the founder of macrobiotics, was a firm believer in a "life force" that he claimed was present in everything and that can be weakened or strengthened through external forces such as the diet.

The introduction of macrobiotic practices into the United States is usually attributed to George Ohsawa (1893-1966), who was allegedly healed of tuberculosis by a student of Hufeland named Sagen Ishizuka (1850-1910). Ohsawa combined elements of Zen Buddhist philosophy with macrobiotic principles and popularized his approach through advocacy of the "Zen macrobiotic diet" - the diet from which the current (and different) macrobiotic regimen was developed.

The American Medical Association's Council on Foods and Nutrition has noted various types of nutritional deficiencies associated with one of Ohsawa's diets, some of which proved fatal. These include scurvy, anemia, hypoproteinemia (low serum protein), hypocalcemia (low serum calcium), emaciation due to starvation, and loss of kidney function due to restricted fluid intake.

Today's leading proponent of macrobiotics is Michio Kushi, founder and president of the Kushi Institute in Brookline, Massachusetts. His books contain case histories of people whose cancers have supposedly disappeared after they adopted macrobiotic eating.

Sadly, in July 2001, Kushi's wife and colleague Aveline died of cervical cancer. She underwent standard radiation treatment when the cancer was detected but when it spread to her bones and no other treatment was available, she turned to acupuncture and other "Eastern" methods to no avail.

Macrobiotics is more than just a diet. It is also a lifestyle that is rooted in a belief system that is not compatible with Christianity.