Note: This blog was reviewed and updated in May, 2020.

JR asks: "Has Johnnette ever made any comment about Mr. Dougherty?  I've read his book, Fast Lane to Heaven, and have read everything on his website.  Nothing seems to be contrary to Church teaching, and he seems to be a very honorable man, but I'd like another opinion." 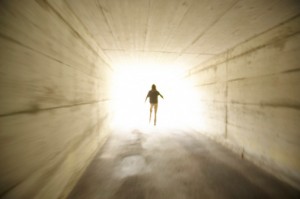 For those who may not know, Ned Dougherty is a former successful nightclub owner who experienced a near-death experience (NDE) after suffering a heart attack. During this NDE, Mr. Dougherty received messages about the future from a "Lady of Light" who he believes was the Virgin Mary. He experienced a profound conversion of heart after this episode and authored a book about the experience, Fast Lane to Heaven, in March 2001 which contained a prediction about the Sept. 11 terrorist attack.

Ned, who is a practicing Roman Catholic who attends daily Mass, claims to have had several life-changing encounters with the "Lady of Light" since the NDE and says he receives messages from Jesus, Our Lady, and St. Michael, which he publishes on his website. The primary mission of his apostolate, the Mission of Angels Foundation, is to help people recognize that "we are primarily spiritual beings."

Some of the goals of this apostolate are to promote an understanding of the dignity of human life at all stages, to promote hospice care and end-of-life support for the dying, and to share "spiritually transformational experiences" such as "pre-birth experiences" (in the New Age this can include past life experiences) and NDEs. He also wants to establish a spiritual community center which would include a holistic healing center and "health spa with facilities that integrate spiritual healing arts with conventional disciplines of science and medicine."

According to the Miracle Hunter website, the Church has made no decision on the veracity of these messages.

There are two big warnings I would like to give about purported visionaries and NDE prophets such as Ned Dougherty, precautions that I'm sure he would wholeheartedly agree with.

Second, while the Church has made no pronouncement about NDEs and science is still studying the phenomena, this fascinating subject has become the unfortunate victim of New Agers. This is why we so rarely hear about NDEs that name the "being of light" as Jesus Christ, that involve a specific judgment, or that involve anything negative such as an experience of hell (even though these NDEs definitely occur!)

[One caution I might add about Mr. Dougherty is that he supposedly served as a media spokesman for the International Association of Near Death Studies, a site which stakes many of these New Age claims, saying that negative NDE's are rare and that the "rarest of all" are NDEs in which a person "feels negatively judged by a Higher Power."]

The reason behind all the New Age "spin" in the study of NDEs is because the founders of the modern NDE movement were heavily involved in the New Age. You can read more about that in this blog.

While NDEs make fascinating reading, some of the best advice I've ever gotten on this subject came from Reality magazine, which is a publication of the Irish Redemptorists.

" . . .(W)e might say that widely reported incidents of near-death experiences are at least an indicator that what we assert by faith might well correlate with what some have experienced. Beyond that, however, we ought to place the mysterious issue of death squarely where it belongs: under the wide mantle of God's merciful love."