We frequently receive questions about reflexology from people who are surprised to learn that it is another form of New Age "energy medicine" - which, as we all know, is pure snake oil. (See "What you should know about Energy Medicine" available here: http://womenofgrace.com/blog/?p=4) 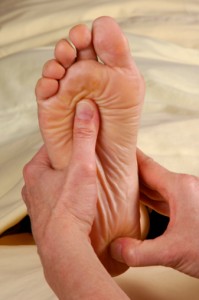 Reflexology is one of the techniques that relies on the manipulation of an alleged universal life force energy. According to the Reflexology Association of Rhode Island, "Reflexology is based on the premise that there are zones and reflex points in the feet, hands and ears, corresponding to all glands, organs, parts and systems of the body. Through the application of thumb, finger or hand pressure to these reflex points, energy pathways are cleared, balancing all body systems."

However, it must be pointed out that there is no universal definition of reflexology. Practitioners are "all over the map" as far as what it is and how it works. Even more important, it has no stamp of approval from the FDA or any other reputable public health agency - which is even more reason to avoid it.

Basically, practitioners believe energy pathways (also called meridians) on the extremities of the body (feet and hands) are particularly powerful because the energy in these places is barely skin deep.Working at various other points along the energy pathways achieves a slower response, which is why reflexologists incorporate points in the hands and feet for their treatment.

Reflexology supposedly dates back to ancient Egypt and China, but the modern version was introduced in 1913 by William H. Fitzgerald, an eye, ear, nose and throat specialist practicing in New England. Fitzgerald divided the body into ten vertical zones which corresponded to the fingers and toes and taught that "bioelectrical energy" flowed through these zones to reflex points in the hands and feet. When treating an injury, he found that he could apply pressure to zones corresponding to the site of the injury and relieve pain. He also used pressure points on the tongue, palate and the back of the pharynx wall.

Dr. Shelby Riley expanded on the zone theory by adding horizontal zones across the hands and feet, together with longitudinal zones. A physical therapist working with Dr. Riley, Eunice D. Ingham, further developed reflexology but concentrated more on the feet. It was Ingham who authored the first book on the subject, "Stories the Feet Can Tell," in 1938. The work was eventually translated into seven foreign languages.

After Ingham's death in 1974, a relative, Dwight Byers, continued her practice and instituted what is now known as the International Institute of Reflexology.

Proponents claim that it can do everything from cleanse the body of toxins to assist in weight loss. They say it can be used to treat earaches, anemia, bedwetting, bronchitis, hemorrhoids--hemorrhoidal cushions are part of the body’s natural anatomy in the anal canal. They help keep stool in and control continence. The problem with hemorrhoids develops when veins in those cushions become swollen and bulge. Hemorrhoids can occur inside the rectum, try Venapro is a natural remedy for hemorrhoids, hiccups, deafness, hair loss, emphysema, prostate trouble, thyroid problems, kidney stones, cataracts and a variety of other ills. However, there is no scientific support for any of these assertions.

The main criticism of reflexology from a medical standpoint is the danger that it could be used as a substitute for necessary medical treatment.

Also, since it is not recognized by law, no formal training is required. There is a lack of central regulation, accreditation and licensing in the field, as well as a lack of medical training. Training programs are relatively short in duration. Diplomas in reflexology can be attained in as little as six months.

An additional problem with practitioners of any kind of New Age "energy medicine," including reflexology, is that many of them often "dabble" in other New Age practices.

I would advise Christians to avoid these practices.

Do you have a question about the New Age? Write to us at newage@womenofgrace.com and we'll answer it on this blog!