As promised, this blog will deal with the occult - what it is, how it manifests itself, and who is behind it. 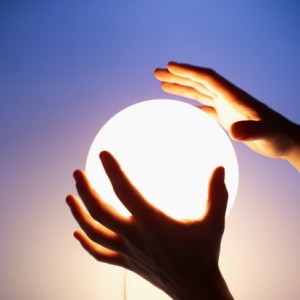 The word “occult” pertains to any system that claims to use or have knowledge of secret or supernatural powers or agencies. This would include witchcraft, alchemy and magick, as well as all forms of divination, such as palm reading, fortune-telling, tarot cards, ouija boards, and astrology. The occult also includes spiritualistic practices such as séances, channeling and mediumship, and out-of-body experiences such as astral projection.

Just a glance at this list should be enough to tell you that all of these practices are enthusiastically promoted by New Agers which is why occultism is considered to be a major component of the New Age movement.

“Occult practices are intended not only to lead the New Ager to esoteric wisdom, but also to convince him through successful application that he has gained the power for which he searches,” writes New Age expert, Johnnette Benkovic.  “Through occult practices, the New Ager hopes to manipulate the powers of the universe to conform with his own wants, desires, and needs.”

All of these practices supposedly contain some kind of “secret” knowledge that will enable one to tap into new and hidden powers in the universe.

That many of these practices do indeed bring hidden powers into play is testified to by the many strange phenomenon associated with these practices. For instance, psychics will frequently reveal information they couldn’t possibly know. Magic spells often bring about the desired results. This is proof that other powers exist, but what are they? And where do they come from?

Human imagination certainly plays a role in some cases and it is a common practice among seers to give ambiguous information that could apply to just about anyone. But there are also those cases where the practitioner, whether knowingly or unknowingly, is drawing their abilities from the power of darkness.

“The New Agers call these powers of darkness by various names such as spirit guides, ascended masters, and avatars,” Benkovic writes. “They do not recognize them as evil spirits, but consider them to be highly evolved beings who passed through several incarnations on their way to enlightenment. Now enlightened and no longer needing to be reincarnated, they seek to bring us the knowledge we need on our spiritual journey.”

There is supposedly an infinite number of these beings; Jesus Christ, Buddha, Seth, Ramtha, Lazaris, and the Blessed Mother. Lucifer is also on this list where he is usually referred to as the “Angel of Light.”

The occult arts include a variety of ways of contacting these spirits, most of which involve some form of mediumship or altered state of consciousness such as a trance.

Most people get involved in the occult by accident. They don't understand the spiritual realm or the beings that are known to inhabit it, of which there are three: God, angels/demons, and disembodied human souls. There is no such thing as a spirit guide or an avatar. These beings were created by New Agers and are based on information gleaned from channelers and psychics, not from written documents such as the Bible and various other sources that are among the oldest written records known to man.

We know from these latter sources that God despises anyone who dabbles in the occult. “Let no one be found among you who sacrifices his son or daughter in the fire, who practices divination or sorcery, interprets omens, engages in witchcraft, or casts spells, or who is a medium or spiritist or who consults the dead. Anyone who does these things is detestable to the Lord.” (Deuteronomy 18: 10-12)

Therefore, He would not contradict Himself by giving prophetic information to anyone who resorts to these methods.

Could it be an angel? Yes, but angels are messengers of God who exist solely to do God's bidding (Catechism No. ) and if God would not be involved in occult activities, He certainly won't allow His angels to do so.

What about disembodied human souls?

This isn't possible except by a special intervention, which Fr. Robert Allgaier explains in his article, "The Ouija Board: A Game or a Gamble?"

“Part of being a physical and spiritual creature means that we use our physical bodies to communicate with physical creatures on earth. Humans have no natural power, either in this life or in the next, to communicate with the material world apart from their bodies. Any such ability would have to come from either a preternatural source (an angel or a demon) or a supernatural source (God Himself).” Because God despises those who "consult the dead" we already know that He won't facilitate the appearance of someone for such frivolous reasons as to appear at a seance or to throw pots and pans around in the middle of the night. His saints are permitted to appear only for the most serious reasons, such as to ask for prayer or to give some kind of important guidance.

This leaves only one other option for who – or what – is the power behind the occult. Demons.

Demons are spiritual creatures (angels) who maliciously rejected God’s offer for eternal life and now exist in eternal separation from Him. Their hatred of God is beyond human comprehension. Although they possess much of the same power as good angels, because they have separated themselves from God – the only true source of love – demons are incapable of either giving or receiving love. Since humans are made in the image and likeness of God, there are no other creatures in the material universe that remind demons more vividly of God than us. Hence, next to God and the holy angels, human beings are the most hated by demons.

In other words, demons have both the power and the motive to answer human attempts to communicate with the spiritual world through divination.

Once we realize this, it becomes very easy to see why evil spirits want to communicate with us through divination and other occult means. As Fr. Allgaier explains, “They know that once a person begins to divine, a spiritual door or portal opens between the material world and the spiritual world. . . . Without divination, demons must content themselves to work in the world indirectly, mostly by enticing humans to sin. The more humans sin, the more evil is brought into the world. . . . But even in a world thoroughly obsessed with sin, demons still must work indirectly. That all changes when the portal between the material world and the spiritual world is opened. The most common way this happens is through divination. Once that door is opened and a demon ‘gets a foot inside,’ resealing that portal can be remarkably difficult."

Aside from breaking the first commandment, we show a profound lack of trust in God when we turn to the occult for help. "The temptation to turn to the occult for answers by consulting Ouija boards or other forms of divination should sound a spiritual alarm in us about where we are in our relationship with God and the place He has in our lives,” Fr. Allgaier writes.

The Catechism also warns that the use of these devices is wrong because they “conceal a desire for power over time, history, and, in the last analysis, other human beings, as well as a wish to conciliate hidden powers” (No. 2116).

If you want to read more about the occult, our Learn to Discern Series has several booklets on this subject:  Astrology, Magic, Psychics and Channeling, Wiicca/Witchcraft