One of our most faithful blog readers, CF, just sent in this suggestion for people who want to work out without being pummeled with Eastern religious practices. 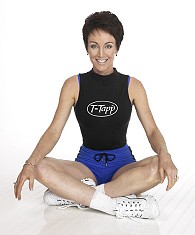 It's called T-Tapp, and it was designed by exercise physiologist/rehabilitative trainer Teresa Tapp. Teresa spent 18 years in the modeling industry where she helped models get back into shape after their pregnancies. Having lost her mother to cancer when she was only five years old, Teresa went on to become a pre-med student who was studying the effects of exercise on cancer patients. Her professors were amazed at her grasp of different exercise philosophies, something for which Teresa credits God, saying He gave her the ability to create effective exercise routines that not only help get into shape, but also help relieve chronic pain and stress. "My professors would ask me where I would get some of my ideas on exercise and I would laugh because they didn't believe that God had just given me the information to pass on," Teresa once told Kentuckiana Family Magazine. She also suffered from scoliosis (curvature of the spine) and developed exercises that relieved her pain, moves that she eventually used on the models that would come to her for relief of chronic back pain caused by the unnatural poses they were often forced to hold for long periods of time for photographers. Her program focuses on strengthening the core in order to stimulate the metabolism and work the lymphatic system to eliminate toxins from the body. As Teresa once described to Prevention Magazine: "T-Tapp's "use of comprehensive, compound muscle movement combined with linear isometric, large muscle movement and lymphatic pumping can significantly increase cardiovascular rate without any jumping or use of weights yet deliver rehabilitative muscle strength to the spine, shoulders, hips and knees. . . . Most exercise programs only use isotonic movements, but in T-Tapp I always work muscles with both attachments activated, as well as work 5 or more muscles at the same time. This type of maximized muscle movement enables the body to tighten and tone muscles with girdle strength developing muscle density instead of muscle bulk. Visible inch loss comes quickly - usually within 5 days. . . ." Her workouts are touted for everything from firming up after childbirth to helping baby-boomers turn back the hands of time. She also incorporates practical nutrition advice into her program. “God designed us so that when there is an upset in the balance, it effects our overall well-being. If we don’t get enough exercise, aren’t eating properly or are dealing with sickness it becomes difficult to pursue God’s best for our lives.” Teresa is for real. When our reader questioned one of the links on her page, she wrote back to say she wasn't aware of the link but promised to check into it. "As a Christian, I am respectful and honor God with a multitude of thanks for allowing me to have the knowledge of how powerful his creation, our body, is and be able to educate and elevate others to move and treat it with respect," she wrote. "I am humbled that God has given me such a gift and accept the responsibilities that go with it." Check out T-Tapp today!