Candles used in a voodoo sex ceremony are being blamed for a fire that swept through a Brooklyn apartment building last weekend, leaving one woman dead and 20 others injured. 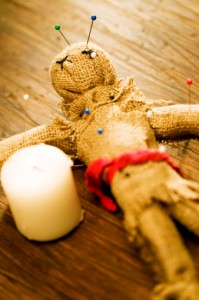 MyFoxNY.com is reporting that the fire, which occurred on the evening of Feb. 19, started when a woman paid a man known in the neighborhood as a voodoo priest to perform a ceremony that would bring her good luck. The ceremony involved the man and the woman having sex in a bed surrounded by candles. According to officials in the Fire Department of New York (FDNY), the candles set fire to the bed linens and clothes that were on the floor. The couple attempted to douse the flames with water while another person in the apartment tried to vent the smoke by opening windows and the front door. This allowed wind gusts to "shoot the flames back inside, creating a blowtorch effect as winds whipped in through the open window and pushed fire out into the hallway," according to an FDNY statement. When the people in the apartment ran out, they left the door open, which allowed the flames to  spread to the fourth, fifth and sixth floors, eventually causing part of the roof and the fourth floor to collapse. Mary Feagin, 64, who lived on the sixth floor, died in the fire, and at least 20 firefighters and three other people were hurt. It took nearly seven hours for 200 firefighters from 44 companies to bring the fire under control. Voodoo is an animistic religion which is based on the belief that there is no separation between the spiritual and material world. Animists believe spirits or souls can be found in humans, animals, plants, rocks, mountains, and even natural phenomena such as thunder and lightning. Voodoo, which means "spirit," is believed to have originated in Africa and came to the West via the slave trade. It is practiced around the world such as in Brazil, where it is called Candomble, and in the Caribbean where it is known as Obeah. In Haitian voodoo (known as vodou), the principle belief is that deities called Lwa (or Loa) are subordinates to a god named Bondye. This supreme being remains aloof from human affairs which is why most worship is directed toward the Lwa. Other characteristics of voodoo involve veneration of the dead and protection against evil. Typical voodoo ceremonies include dancing, chanting, candles, drumming, and animal sacrifice. The practice involves various kinds of sorcery such as spell casting and the use of voodoo dolls, potions, and talismans.  Some practitioners employ ritualistic "sex magic" such as red sex magic which is used to enhance of encourage sex with a partner or someone you want to be with. Black sex magic uses special candles to break up the sex lives of others. It is unclear what kind of rituals were being used during the sex ceremony in New York, but authorities believe it was of the "homegrown" variety and was probably invented by the voodoo priest who was involved in the incident. Send your New Age questions to newage@womenofgrace.com