A 19 year-old man who believes he's a vampire was arrested in Galveston, Texas this past weekend after he broke into a woman's apartment and attempted to bite her on the neck. 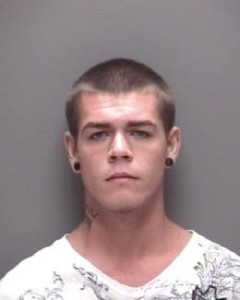 ABCNews/KTRK in Galveston is reporting that Lyle Bensley was arrested after he broke into a woman's apartment early Saturday morning. Bensley was wearing only boxer shorts at the time and behaved in a bizarre fashion while attempting to bite the woman. "He got inside and was hissing at her and growling at her and did attempt to bite her on the back of the neck," said Capt. Jeff Heyes with the Galveston Police Department. The woman, whose name has not been released to the public, said Bensley tried to drag her out of the apartment, but she managed to run away. Her assailant chased her into the parking lot where she was able to get into a car which was occupied by two of her neighbors. Bensley ran up to the car and was beating on the windows as the group drove away. Police caught up with Bensley a short time later when he reportedly told police he was a vampire. Bensley has been charged with burglary with intent to commit assault. He was booked into the Galveston County Jail with bond set at $40,000. According to KSAT, detectives say this is one of the most bizarre cases they've handled. "He was adamant on the fact that he was a vampire and he had been here for 500 years," Officer Andrian Healy said. "Stated numerous times he wasn't out to hurt the human race." Bensley's behavior at the jail was also strange. "Yelling and screaming, growling, hissing," Office Daniel Erickson described. "He actually held on to one of the benches and was warning us to restrain him because he didn't want to be forced to hurt or kill anybody. Gnashing his teeth at us." Police said Bensley admitted to drinking the night of the attack. He has been referred to a deputy who handles mental health issues. There are several known reasons why people may believe themselves to be vampires. One of the more obvious is the explosion of vampire-fiction which reflects many popularly held pseudoscientific beliefs and has made vampirism trendy. Youth, whose brains are unable to fully distinguish between what they read or see in movies from reality, often become very emotionally attached to fictional characters to the point of emulation. However, there are other conditions in which people have a bona fide fetish for human blood, such as hematomania. People who suffer from this condition derive sexual pleasure or other psychological needs from the consumption of human blood which is usually obtained from either a willing donor or, in some cases, from murder. Another condition, known as Renfield’s Snydrome, also called clinical vampirism, was named after the Renfield character in Dracula. In this condition, a person actually has the delusion of being a vampire. "The condition is often caused by some event involving blood in childhood, such as an accident, injury, or ingestion of blood," explains an article appearing on Psychology at Suite 101. "The sufferer, usually male, holds the belief that blood brings about certain powers and also may associate blood with sexual excitement and fantasies. Only a few cases are on record of this unusual condition."