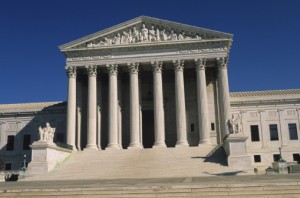 San Francisco’s resolution, adopted March 21, 2006 in condemnation of the Church's stance in prohibiting adoption by same-sex couples, refers to the Vatican as a “foreign country” meddling in the affairs of the City and proclaims the Church’s moral teaching and beliefs on homosexuality as “insulting to all San Franciscans,” “hateful,” “insulting and callous,” “defamatory,” “absolutely unacceptable,”  “insensitiv[e] and ignoran[t].” According to Catholic doctrine, allowing children to be adopted by homosexuals would actually mean doing violence to these children, in the sense that their condition of dependency would be used to place them in an environment that is not conducive to their full human development.  Such policies are gravely immoral, and Catholic organizations must not place children for adoption in homosexual households.  The Thomas More Law Center (TMLC), a national, public interest law firm based in Ann Arbor, Michigan, challenged the constitutionality of San Francisco’s resolution on behalf of the Catholic League and two Catholic residents of San Francisco.  Richard Thompson, President and Chief Counsel for TMLC, commented, “The Ninth Circuit prohibits a government display of the passive symbol of the war memorial cross on Mt. Soledad, yet it expressly approves of the government’s explicit condemnation of Catholic religious beliefs.  This outrageous double standard is made possible by the Supreme Court’s flawed tests by which it interprets the Establishment Clause of the First Amendment—an interpretation that is hostile toward religion.” TMLC’s legal challenge claimed that the City’s anti-Catholic resolution violated the First Amendment, which “forbids an official purpose to disapprove of a particular religion, religious beliefs, or of religion in general.”  The Board’s resolution went so far as to urge the Archbishop of San Francisco and Catholic Charities of San Francisco to defy Church directives. This past October, in a fractured, eleven judge opinion in which three judges concluded that TMLC should prevail, three judges concluded that the City should prevail, and five judges concluded that the plaintiffs did not have standing to bring the case, the Ninth Circuit ultimately affirmed the lower court. As Circuit Judge Kleinfeld appropriately observed in his opinion, which, unfortunately, received only two additional votes: The “message” in the resolution, unlike, say, the message that might be inferred from some symbolic display, is explicit: a Catholic doctrine duly communicated by the part of the Catholic church in charge of clarifying doctrine is “hateful,” “defamatory,” “insulting,” “callous,” and “discriminatory,” showing “insensitivity and ignorance,” the Catholic Church is a hateful foreign meddler in San Francisco’s affairs, the Catholic Church ought to “withdraw” its religious directive, and the local archbishop should defy his superior’s directive.  This is indeed a “message of . . . disapproval.”  And that is all it takes for it to be unconstitutional. In addition to asking the Court to reverse the Ninth Circuit decision, TMLC is asking the Court to discard its current Establishment Clause jurisprudence, which is unworkable and leads to absurd results that impermissibly disfavor religion, in favor of a jurisprudence that is consistent with our Nation’s strong religious history and traditions.  Robert Muise, Senior Trial Counsel for TMLC handling the case, stated, “This case is a ‘poster child’ for the inconsistent results caused by the Supreme Court’s muddled Establishment Clause case law.  Thus, it provides an opportunity for the Court to abandon this unworkable jurisprudence in favor of one that respects our Nation’s religious heritage, history, and traditions and that eschews the absurd results produced by the status quo.  Unfortunately, under the current jurisprudence, the closest measure for predicting the outcome of a particular case is the personal predilections of the judge or judges deciding it.”   The Thomas More Law Center defends and promotes America’s Christian heritage and moral values, including the religious freedom of Christians, time-honored family values, and the sanctity of human life. © All Rights Reserved, Living His Life Abundantly®/Women of Grace®  http://www.womenofgrace.com