By Susan Brinkmann, OCDS Staff Journalist The results of a national assessment test has found that U.S. schoolchildren are pitifully lacking in their understanding of key facts about American history, the principles of democracy, and America's role in the world. 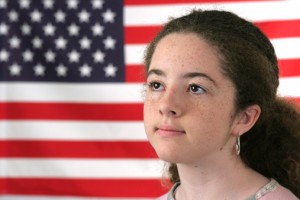 The Wall Street Journal is reporting that the history exam was administered by The U.S. Department of Education to a representative sample of public and private schools, testing 7,000 fourth-graders, 11,800 eighth-graders and 12,400 high-school seniors. Only 20 percent of U.S. fourth-graders and 17 percent of eighth-graders who took the 2010 history exam were "proficient" or "advanced," a paltry number that remains unchanged since the last time the test was administered in 2006. The test is scored on a 0-500 point scale, and those scores are broken into "below basic," "basic," "proficient" and "advanced." For example, if a fourth-grader scored above "basic" they would know how to interpret a map about the Colonial economy. If they scored as "proficient" they would know that canals helped increase trade among states. Students considered "advanced" would be able to explain how factories changed American work. The results were even worse for high schoolers where only 12 percent of 12th-graders scored in the proficient range. More than half of all seniors scored at "below basic" the lowest possible achievement level. The only good news in the results was found among African-American and Hispanic students in fourth and eighth grades whose average scores showed improvement over previous tests. "The history scores released today show that student performance is still too low," Education Secretary Arne Duncan said in a statement. "These results tell us that, as a country, we are failing to provide children with a high-quality, well-rounded education." Some experts say the increased focus on reading and math under the federal No Child Left Behind law in the past decade is to blame for lackluster performance by students in the areas of history and science. The federal law mandates that students be tested in math and reading every two years and every four years in history. Sue Blanchette, president-elect of the National Council for Social Studies, a national association of K-12 and college social-studies teachers, told the WSJ that the results were disheartening and blamed the result marginalization of history education in the last decade. "Everyone is going to participate in civic life by paying taxes, protesting against paying taxes, voting, and we must teach our children how to think critically about these issues," she said. "Clearly, we are not doing that." She wants to see the history test administered every two years just like the national math and reading exams instead of every four years. "What gets measured, gets taught," she said. © All Rights Reserved, Living His Life Abundantly®/Women of Grace®  http://www.womenofgrace.com