By Susan Brinkmann, OCDS Staff Journalist Despite being the coldest day of the winter thus far, tens of thousands of Americans jammed the streets of Washington yesterday to stand for life with newly elected pro-life lawmakers promising support for life while the nation's president used the occasion to recommit himself to abortion. 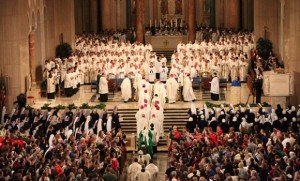 LifeSiteNews is reporting that March for Life 2011 began at 2:00 p.m. after a rally on the National Mall, with participants walking to the steps of the Supreme Court.  The theme for this year's March was: “Thou Shalt Protect the Equal Right to Life of Each Innocent Born and Preborn Human in Existence at Fertilization. No Exception!  No Compromise!” Speaking before a crowd that was filled with young people from across the country, the new House Majority Leader Eric Cantor pledged that Republicans’ “number one priority” in the new Congress is to instate a permanent ban on taxpayer funding of abortion. “Now the tide has turned.  There’s a new majority in town,” he told a cheering crowd. Congressman Chris Smith, the Republican co-chair of the Congressional Pro-Life Caucus called for an end to the “bigotry” against children in the womb.  “In order to sanitize the violence, the multibillion abortion industry systematically dehumanizes the weakest and most vulnerable,” he said. Rep. Smith also mentioned the grisly find in a Philadelphia abortion clinic where the owner performed late term abortions with unlicensed staff in attendance, murdered newborns with a scissor and kept fetal body parts in jars. “The tens of thousands of young people here today bravely defending the youngest people in America know that the killings in Philadelphia - and all abortion - is violence against women and children,” Smith said.  “They know that the only thing the multibillion abortion industry produces is victims and that women deserve better than abortion. They know that the pro-life movement loves, honors, deeply respects and welcomes post-abortive women who are silent no more.” He added: “Our young people know child abuse when they see it. And they - all of us - demand that it end.”. While an unprecedented number of pro-life lawmakers addressed the crowd, President Barack Obama chose to release a statement on the 38th anniversary of Roe v. Wade proclaiming his continued support for abortion . “Today marks the 38th anniversary of Roe v. Wade, the Supreme Court decision that protects women’s health and reproductive freedom, and affirms a fundamental principle: that government should not intrude on private family matters.  I am committed to protecting this constitutional right.  I also remain committed to policies, initiatives, and programs that help prevent unintended pregnancies, support pregnant women and mothers, encourage healthy relationships, and promote adoption.  And on this anniversary, I hope that we will recommit ourselves more broadly to ensuring that our daughters have the same rights, the same freedoms, and the same opportunities as our sons to fulfill their dreams.” The night before the March, an estimated 10,000 people packed the National Shrine of the Immaculate Conception for a vigil Mass for Life. Cardinal Daniel DiNardo, of Houston, the chairman of the US bishops’ pro-life committee, was the main celebrant. Cardinals Donald Wuerl of Washington, Francis George of Chicago, Justin Rigali of Philadelphia, and Sean O’Malley of Boston joined him on the altar along with 39 bishops and hundreds of priests. LifeSite's Steve Jalsevac reports that Cardinal DiNardo took a moment to thank everyone for attending the March and made special mention of the large numbers of young people in the crowd. “To the astonishment of nature, of the chattering classes and of disinterested and jaded media, you have continuously come forward here and throughout the places where you live to be unflagging witnesses to the inestimable worth of each human person,” said DiNardo.  “We your elders become exhausted just watching you!,” he said to an outburst of applause. During his homily, he mentioned the disturbing new trends that attack the dignity of life by way of "technological progress" and condemned policies that force American to comply with abortion, either through taxation or by denying their conscience rights in the field of health care.  “The seemingly daily attempts to deny nurses and pharmacists their conscience rights are disquieting,” he said.  “A further violation takes place when taxpayers are forced to fund abortions.  The blindness against the rights of the unborn seems to move to an inability to respect the rights of those of us who respect and fight for the rights of the unborn.” During his homily, he also expressed hope that recently introduced legislation in the House of Representatives would become law. In particular, he cited three bills introduced on Jan. 20: -- The Abortion Non-Discrimination Act, which would prevent governmental discrimination from forcing any health care entity to performing or participating in abortions. -- The No Taxpayer Funding for Abortion Act, which would enact the Hyde amendment which prohibits federal funding of abortion and the Hyde/Weldon amendment on conscience rights for health care workers into law for all federal departments and all avenues of federal funding. -- The Protect Life Act, which would apply long-standing federal policies on abortion funding and conscience rights on abortion to the Patient Protection and Affordable Care Act. "These matters deal with public policy and they are issues in the public square in which you can participate," Cardinal DiNardo told the congregation. "Advocacy on behalf of human life is an important dimension of our pro-life cause." © All Rights Reserved, Living His Life Abundantly®/Women of Grace®  http://www.womenofgrace.com