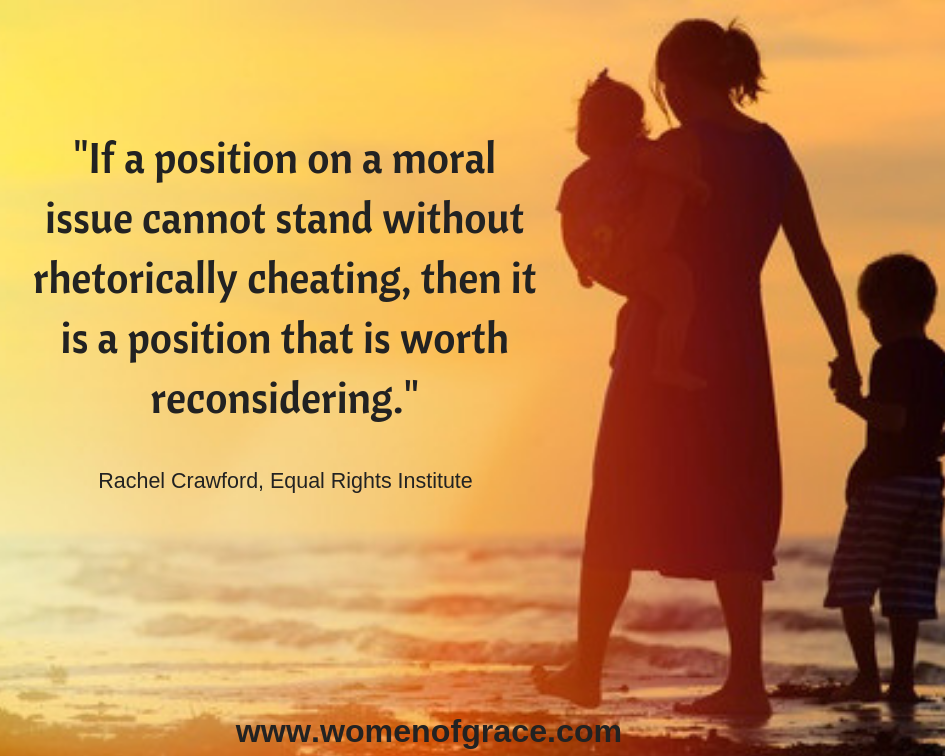 Today and every day:

"I trust women to make their own #reprohealth decisions. Not just part of the time, but all of them time." @JeanneShaheen #NHSenDebate

This rhetoric is an unfair representation of the pro-life position because it implies that pro-life people do not trust women. It insinuates that people oppose legal abortion because they think women are inadequate and unable to make choices about their lives. This is a common and false accusation of pro-life people.

Pro-life people are not opposed to abortion because they distrust women. Implying that misogyny is influencing their position on abortion is a misleading sidestep of the real issue. Pro-life people think that a woman should be able to make her own decisions about which doctor she wants, what clothing she wears, her career, her education and many other choices which men have as well. There are some choices, however, which are dangerous or violent in some way. These choices deserve careful examination by the public to determine if they should be against the law. Examples of these choices would be drinking and driving, vandalism, or assault. The choice to kill people should clearly be against the law. Pro-lifers argue that human embryos are people, so you can’t kill them.

Imagine there is a woman named Jessica[1] who is the mother of a three-year-old daughter, Makayla. Her daughter is one of those children who is always making a mess, throwing fits at Target, and cutting her own bangs. Jessica feels like she has had enough, so she decides that she wants to kill her daughter and make it look like an accident. She tells her best friend Emma about her plan and Emma objects. She says that it would be clearly wrong for Jessica to do this. Jessica replies:

Jessica: You don’t understand what I am going through. I have given this plenty of thought, it is my choice. Why don’t you trust me to make my own decisions?

Emma: What? This isn’t about trust, I am saying that killing Makayla is not a moral solution.

Jessica: You’re only saying that because I am a woman. Why don’t you trust women? If I was Makayla’s father then people would be lining up to help me instead of trying to control my choices! Women are just as strong and capable as men in our ability to control our lives. I wish you would see that.

If Jessica’s responses sound bizarre that is because it is deceptive to respond to someone who makes a moral objection to your actions by accusing them of not trusting you. It is a tactic meant to seize the moral higher ground. Jessica is deflecting Emma’s concern by trying to change the conversation with an accusation of misogyny. She is trying to tell Emma her moral compass is broken and her insight on this issue is corrupt because of the way she sees women. It may seem strange for a woman to accuse another woman of misogyny, but the pro-life movement, which is largely led by women, regularly receives the same accusation from pro-choice people. Even if women didn’t play a significant role in leading the pro-life movement, it would still be an absurd objection. Jessica’s words would be no less deceptive if Emma was a man. No one should be trusted to decide whether or not to kill an innocent person, and pro-life advocates argue that abortion kills an innocent person.

You may feel like my example is not comparable to abortion because Makayla is a young child, not a human embryo. If you think pro-life people are wrong to claim that the two deserve the same moral consideration, then that’s the argument you should make. Put down the insults and accusations. Instead, make an argument to show why you think we are wrong about the value of the human embryo.

Abortion is a very complicated issue. Women face a biologically disproportionate challenge when it comes to pregnancy, birth, and childbearing. On top of that, there are compounding historical factors of men controlling women, abusing women, and raping women. This article is not attempting to respond to all of these reasonable concerns regarding reproductive control, misogyny, and women’s bodily autonomy. I am trying to demonstrate that there is misleading language being used by abortion-choice advocates in an attempt to discredit the pro-life position.

Pro-life people do not want to perpetuate injustices against women any more than do our pro-choice friends. We want to expose and end the injustice of abortion. If you are a pro-choice advocate who uses this “Trust Women” rhetoric, ask yourself why you use such clearly misleading language. If a position on a moral issue cannot stand without rhetorically cheating, then it is a position that is worth reconsidering.

[1] In this thought experiment, Jessica is analogous to some abortion-choice advocates who use dishonest rhetoric to justify their views on abortion. However, I do not want to allow this comparison to inadvertently misrepresent my thoughts about the women who have had abortions or those who support legal abortion. I do not associate the moral callous of a person who would seek to murder their three-year-old daughter with women who choose to abort. The purpose of the thought experiment is to expose the rhetoric, not to make a statement about the hearts of women who seek abortions.