By Susan Brinkmann, OCDS Staff Journalist An off-hand comment by a police officer who warned women to be careful how they dress in order to avoid being rape, has sparked an international wave of protests called "SlutWalks" that are aimed at reclaiming the derogatory title for women. 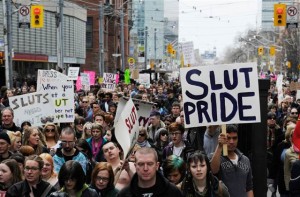 The Associated Press (AP) is reporting that the walks, which have drawn up to 3,000 people, have taken place in Toronto, Ottawa, Dallas and Asheville, South Carolina and are aimed at taking the blame off women and reclaiming their right to dress as they wish. Some women who participate in the Walks attend in lingerie while male marchers wear t-shirts reading, "I love sluts." The purpose is to draw attention to what they call "slut shaming," or shaming women for wanting to appear sexual. "It was taking the blame off the rapist and on the victim," said 21 year-old Nicole Sullivan, a student at the University of Massachusetts-Boston and a SlutWalk organizer. "So we are using these efforts to reclaim the word 'slut.'" "The event is in protest of a culture that we think is too permissive when it comes to rape and sexual assault," said Siobhan Connors, 20, of Lynn, Massachusetts, to the AP. "It's to bring awareness to the shame and degradation women still face for expressing their sexuality ... essentially for behaving in a healthy and sexual way." The protests began in Canada where Toronto police officer Michael Sanguinetti made the remark during a talk at York University in January. A police spokesman said Sanguinetti was disciplined for the comments but remains on duty, and insisted that his comments do not reflect what  police officers are taught in that city. However, thanks to the use of social media, the Walks are catching on in the U.S. and are being planned for major U.S. cities such as Seattle, Philadelphia, Chicago, Reno, Nevada and Austin, Texas. In San Francisco, SlutWalkers are actually trying to make their protest into a family event. "Singles, couples, parents, sisters, brothers, children, friends," the SlutWalk SF BAY Facebook page announces. "Come walk or roll or strut or holler or stomp with us." According to the AP, the rallies typically end with speakers and workshops on stopping sexual violence and calling on law enforcement agencies not to blame victims after sexual assaults. © All Rights Reserved, Living His Life Abundantly®/Women of Grace®  http://www.womenofgrace.com Reuters Photo depicts a typical "SlutWalk" that took place on April 3 in Toronto