By Susan Brinkmann, OCDS Staff Journalist After decades of his own involvement, Father Bill Kneemiller, a Catholic priest and former teacher of transcendental meditation, is issuing a strong warning to the faithful about the dangers of dabbling in Eastern meditation techniques. 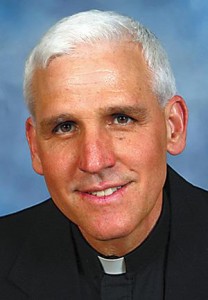 "I have not publicly written about this before because it has taken time to come out of this New Age involvement," he said in an article published in The Catholic Messenger, the newspaper of the diocese of Davenport, Iowa. Father Kneemiller became involved in the New Age just after high school. "As far as my faith life, Catholicism was OK but I wanted to get a spiritual high," he said. He started out by reading a book on yoga entitled, Heaven Lies Within, and rationalized that even Jesus said similar words. From there, he started practicing the Eastern meditation technique known as transcendental meditation (TM), a Hindu technique centered upon the repetition of a mantra that is used for the purpose of achieving "pure awareness" or transcendental consciousness, a unique state of restful alertness which is believed to be a person's innermost Self.  Fr. Kneemiller became deeply involved in TM, traveling to several countries and spending close to a year overseas studying the technique. He met New Age gurus such as Deepak Chopra and Johnny Gray, author of Men are from Mars, Women are from Venus and thought it was wonderful that a group of Trappists were promoting TM [known as centering prayer] and that priests were also endorsing it. "Everything seemed OK at the time because I was taught it is just a technique which enriches everyone’s own religion and the mantra used for this meditation practice was a meaningless word," he said. "It would be decades before I learned that mantras are names of Hindu gods." After 18 years of involvement with Eastern meditation, he started to attend a family rosary group that taught "prayer from the heart" and it completely changed his concept of prayer. What he once thought was just a "rote practice" suddenly became "a conversation and relationship with Christ." As a result, "the New Age-culture started sounding unusual, even strange," he said. He eventually stopped practicing TM and entered the seminary. Soon after his ordination, while attending a healing Mass at Sacred Heart Cathedral in Davenport, a priest said a prayer of deliverance over him and told him he had to denounce the mantra he had used in TM. In 2010, he attended a healing conference in Chicago where he met another priest and former meditation teacher, Father Bob Thorn, a parish priest from Wisconsin, who warned him that he was still under the influence of those meditation techniques.  "He went on to explain that I needed to denounce every Hindu god that is invoked in the meditation ceremony," Fr. Kneemiller writes. "I realized he was right. The transcendental meditation ceremony is filled with dozens of invocations to gods, such as ‘Brahma, Shiva’… you name it; it’s there in the ceremony in which everyone is taught the technique." Three priests helped with the deliverance prayers, two of which were known to be some of the most skilled exorcists in the world. "The priests recommended that I denounce each god and proclaim Jesus Christ as savior, which took about a quarter of an hour.  I did this, and the priest did a casting-out prayer. The healing session was a profound gift and grace. Wow, the effects of spiritual healing! That night, I slept like a baby. Then, the next week, and in subsequent months I have felt lighter and freer than I have ever experienced in my life." Fr. Kneemiller immediately began to preach against New Age practices. "I could never recommend anyone using Eastern meditation for any reason at all," he said. "But, I also now see many intrusions of New Age thought, or re-formulated Hinduism in our culture, and some in our parishes." He issues the same warning contained in the 2003 Church document entitled, Jesus Christ, the Bearer of the Water of Life that “Many people are convinced that there is no harm in ‘borrowing’ from the wisdom of the East, but the example of transcendental meditation should make Christians cautious about the prospect of committing themselves unknowingly to another religion (in this case Hinduism)." “There is no problem with learning how to meditate but the object or content of the exercise clearly determines whether it relates to the God revealed by Jesus Christ … or simply to the hidden depths of the self,” the document states. Catholics should not be dabbling in the New Age, Fr. Kneemiller says, not only because of the dangers, but because we have all we need in Jesus Christ. "Our Church’s teachings remind us that we have in the person of Jesus Christ a trustworthy and sure guide, true man and true God, and source of all goodness!" Click here to read Fr. Kneemiller's testimony. © All Rights Reserved, Living His Life Abundantly®/Women of Grace®  http://www.womenofgrace.com