By Susan Brinkmann, OCDS Staff Journalist While commenting on Sunday's gospel before praying the Angelus yesterday in St. Peter's Square, Pope Benedict XVI acknowledged the doubt and confusion many Christians have toward the Resurrection but reassured them that Christ does indeed "break down the wall of death." 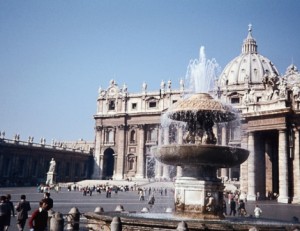 " . . .(D)eath represents for us a wall we are unable to see over," the Pope began. "Even though our hearts reach out beyond, and even though we cannot know what it hides ... we imagine it, expressing our desire for eternity through symbols." However, "even among Christians, faith in the resurrection and in eternal life is often accompanied by many doubts and great confusion, as it concerns a reality beyond the limits of reason and requires an act of faith," he said. "In today's Gospel, the resurrection of Lazarus, Jesus says to Martha, the dead Lazarus' sister, 'Your brother will rise again', and she answers, 'I know that he will rise again in the resurrection on the last day'. Jesus replies, 'I am the resurrection and the life. Those who believe in me, even though they die, will live, and everyone who lives and believes in me will never die'." "This is the real truth, which breaks through and overcomes every barrier!" exclaimed the Pope. "Christ breaks down the wall of death, and in Him there resides the fullness of God, which is life, eternal life. Therefore death had no power over Him; the resurrection of Lazarus is a sign of his full dominion over mortal death, which is like sleep before God." However, there is another death against which Christ fought hard and for which he paid with his life on the cross, the Pope continued, identifying this as spiritual death and the sin which threatens to ruin the existence of every man. "To defeat this death, Christ died, and his Resurrection was not a return to his previous life but the beginning of a new life, a 'new earth', finally reunited with God's heaven," he concluded. © All Rights Reserved, Living His Life Abundantly®/Women of Grace®  http://www.womenofgrace.com