By Susan Brinkmann, OCDS Staff Journalist The Parents Television Council® (PTC) has released the results of its latest study, “Cartoons Are No Laughing Matter,” which documents shocking levels of adult content on networks with the highest-rated primetime animated cable shows among children ages 12-17 such as the Cartoon Network, Disney Channel, Adult Swim and Nick at Nite. 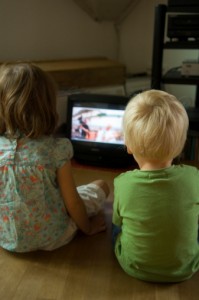 “The findings of this report should be vexing for every parent. The term ‘adult’ not only describes the nature of the cartoon content itself; it also describes the products being marketed to kids,” said PTC President Tim Winter. Instead of the once innocent cartoon fare of mostly slapstick comedy, the new data shows that today's cartoons are full of profanity with storylines involving everything from rape and cocaine use to sexually transmitted diseases and even crystal meth. The PTC found that there is now more sexual content in cartoons than violence. “Just as shocking as the volume and degree of adult material in the cartoons was the abysmal network failure rate in applying consistent TV content rating standards," Winters said. "During the study period, harsh profanity and graphic sexual depictions aired during programs rated TV-PG. Cartoon Network failed to use the ratings system to warn parents about sexual content, suggestive dialogue and explicit language 100 percent of the time. We also discovered the networks are directly marketing adult entertainment products to kids during TV-PG programming, including R-rated movies and TV-MA shows and DVDs.” It is imperative that parents become aware of just how explicit these cartoons are, Winter says.  For instance, the PTC study examined 123 episodes of animated programming that aired on Adult Swim, Cartoon Network, Disney Channel and Nick at Nite for the presence of sexual content, violence, drugs and explicit language between March 21, 2011 and April 14, 2011. They found 1,487 incidents of explicit language, drugs and sexual content during the four-week study period. On average, young viewers were exposed to adult content once every two minutes and 19 seconds. TV-PG rated animation featured sex, drugs or profanity every two minutes and 31 seconds. Adult Swim, which used to begin airing at 11:00 pm ET and now begins at 9:00 pm ET (8:00 pm CT), included some of the highest-rated animated shows among ages 12-17 and the highest levels of explicit content. Major Findings: Sex • Sex (680 instances) surpassed every form of violence (674 instances) in animated primetime cable programming. • Sexual depictions included simulations or obscured scenes of sexual intercourse, pornography, masturbation, pedophilia and prostitution.   Drugs • There were a total of 208 incidents relating to drugs, including cocaine, marijuana, crystal meth, psychedelics and alcohol. Eighty percent of the drug-related incidents were depictions rather than references.   Profanity • The study identified 565 incidents of explicit language on shows rated TV-PG and TV-14 with 27 percent of these incidents occurring on TV-PG programs. Content Ratings • Eighty-five percent of the TV-PG shows and 64 percent of the TV-14 shows containing sexual content did not have an “S” descriptor warning parents. • Cartoon Network failed to use the ratings system to warn parents about sexual situations (S), suggestive dialogue (D) and coarse or crude language (L) 100% of the time. Advertisements • TV-PG and TV-14 shows included advertisements for adult media, including TV-MA DVDs, TV-MA shows, and R-rated movies. • All R-rated movies that aired during the study period were advertised during TV-PG programs. Winter believes one solution to the problem is to allow parents to unsubscribe to explicit cable networks.  " As it stands now, every parent who subscribes to cable so their kids can watch Disney or Nickelodeon is also forking over cash every month to Adult Swim. Parents, not cable companies, should decide which cable networks they want to pay for," he says. “In addition to cable choice and more responsible programming decisions by the networks, the entire television content ratings system needs to be overhauled. The current system fails parents and families when it comes to accuracy, consistency, transparency and accountability,” Winter concluded. Click here to read the entire report. © All Rights Reserved, Living His Life Abundantly®/Women of Grace®  http://www.womenofgrace.com