By Susan Brinkmann, OCDS Staff Journalist Just two weeks after the U.S. 7th Circuit Court of Appeals dismissed a constitutional challenge to the National Day of Prayer, President Barack Obama issued an official proclamation declaring Thursday, May 5, as a day for "all people of faith" to join the presidnet "in asking God for guidance, mercy, and protection for our Nation." 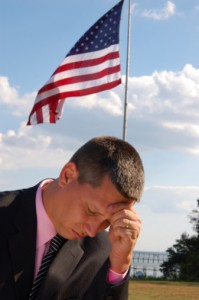 Religion Clause, the blog of Howard Friedman, Professor of Law Emeritus at the University of Toledo, reports that this year's Proclamation calls upon citizens to join the President in "giving thanks for the many blessings we enjoy." It specifically asks for prayer on behalf of members of the armed forces, first responders, victims of natural disasters and "men and women everywhere who seek peace, human dignity, and the same rights we treasure here in America." Efforts by the Freedom from Religion Foundation to put a stop to this year's National Day of Prayer were unsuccessful. The group challenged the constitutionality of the federal statute that creates a National Day of Prayer to take place on the first Thursday of May. A three-judge panel determined that the Foundation had no standing to bring the case, saying that because the statute only directs the president to issue a proclamation, and does not demand that anyone recognize the National Day of Prayer, the group can claim no injury. "Plaintiffs contend  that they are injured because they feel excluded, or made unwelcome, when the President asks them to engage in a religious observance that is contrary to their own principles.... [However] offense at the behavior of the government, and a desire to have public officials comply with (plaintiffs’ view of) the Constitution, differs from a legal injury," wrote Judge Easterbrook. "The 'psychological consequence presumably produced by observation of conduct with which one disagrees' is not an 'injury' for the purpose of standing." As a result, the National Day of Prayer will go on as planned. The privately run National Day of Prayer Task Force has declared this year's theme to be "A Mighty Fortress is Our God" and will host a three-hour Washington DC ceremony tomorrow beginning at 9:00 a.m. This year's honorary chairman is Joni Eareckson Tada, who was left paralyzed after a 1967 car accident, and who has devoted her life to reaching out to the disabled. Florida Congressman Alan West is the only elected federal official scheduled to take part in the events. Because of the increasing religious diversity of the nation, the Task Force has posted the following "Official Policy Statement on Participation of “Non-Judeo-Christian” groups in the National Day of Prayer" on its website: "The National Day of Prayer Task Force was a creation of the National Prayer Committee for the expressed purpose of organizing and promoting prayer observances conforming to a Judeo-Christian system of values. People with other theological and philosophical views are, of course, free to organize and participate in activities that are consistent with their own beliefs. This diversity is what Congress intended when it designated the Day of Prayer, not that every faith and creed would be homogenized, but that all who sought to pray for this nation would be encouraged to do so in any way deemed appropriate. It is that broad invitation to the American people that led, in our case, to the creation of the Task Force and the Judeo-Christian principles on which it is based." © All Rights Reserved, Living His Life Abundantly®/Women of Grace®  http://www.womenofgrace.com