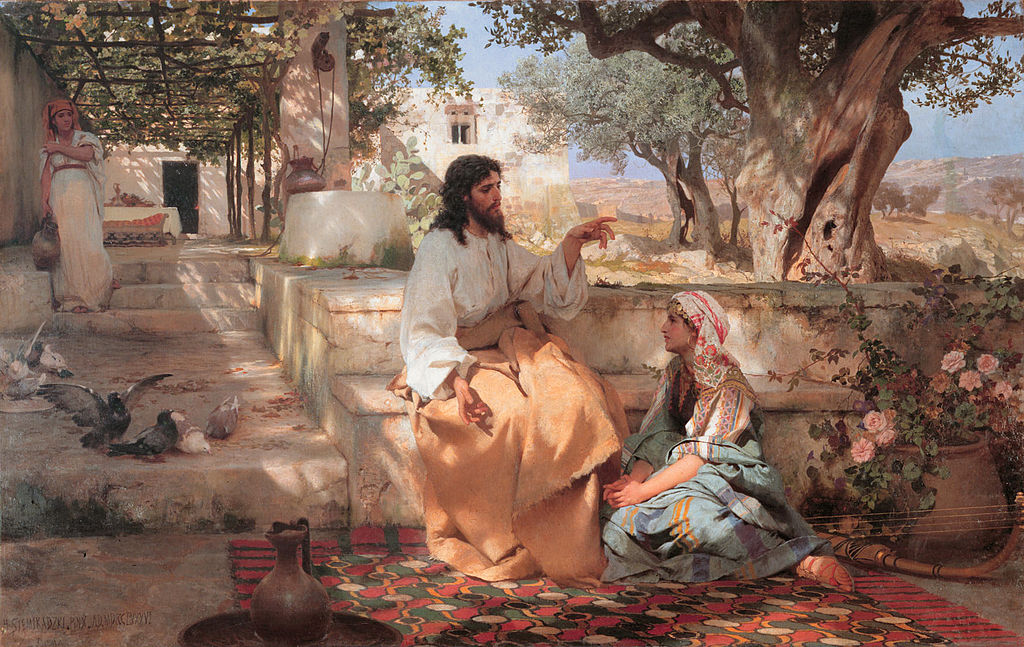 “[Jesus] entered a village where a woman whose name was Martha welcomed him. She had a sister named Mary [who] sat beside the Lord at his feet listening to him speak. Martha, burdened with much serving, came to him and said, ‘Lord, do you not care that my sister has left me by myself to do the serving? Tell her to help me.’ The Lord said to her in reply, ‘Martha, Martha, you are anxious and worried about many things. There is need of only one thing. Mary has chosen the better part and it will not be taken from her’” (Lk 10:38-42).

Sometimes, having heard a Gospel passage repeated over the years, we begin to take its meaning for granted. It’s even more understandable to do so in the case of the narrative of Martha and Mary, given its homey nature. A closer look, however, may reveal more than meets the eye.

Martha, Mary, and their brother Lazarus lived in Bethany, not far from Jerusalem. They opened their home to Jesus, offering Him friendship and respite from the rigors of His itinerant ministry. So it was that, on one occasion, Martha and Mary welcomed Jesus into their home.

Grasping the dynamics of the situation as it played out – with its special resonance for siblings – what happened next was entirely understandable.

Martha obviously took her role of hostess seriously. With just a bit of reading between the lines, we allow the text to paint her portrait: house-proud, hospitable, and very much concerned with her duties, particularly toward the family’s important guest. And since Jesus most likely wasn’t traveling alone, His companions also would require attention.

Energetic and comfortable in her role, Martha plunged into her tasks, preparing provisions and perhaps soliciting extra seating from neighbors. Amidst this flurry of domestic activity, Jesus was seated, no doubt in a place of honor.

Then the situation arose that so greatly offended Martha’s sense of justice and propriety that she begged the Lord’s intervention. Where Jesus sat there also sat Mary, whose rightful place Martha saw as beside her – not at the feet of the Master.

We see that Scripture outlines differences in personality between these two sisters. It was in their perspective on what constitutes the true necessities of life that the sisters’ paths seem to have diverged; it’s not unreasonable to assume they’d had some differences of opinion in the past, considering their family dynamics.

Also interesting is the fact that while the passage involves only three people, two of them are female. Historians acknowledge the second-class-citizen status of women in Jesus’ time, yet the Gospels are filled with references to His interactions with women and – more importantly – to His unfailing compassion and love for them. Listening closely, we hear the affection in His voice as He addresses the disgruntled sister: “Martha, Martha.”

As the passage continues, it becomes obvious that we’re witnessing more than a contrast in temperament between two women; rather, a difference in priorities, with one thinking, “work first, listen later,” and the other, just the opposite.

We can imagine Mary’s perspective – eventually, a meal would be served and the guests’ needs met – but she understood that far greater nourishment came from the soul-satisfying experience of listening to Jesus. Martha, bustling about, intent on hospitality, wasn’t able to comprehend that. As a result, she felt “burdened” and resentful of her sister’s seemingly less-than-responsible attitude.

Jesus’ gentle reproach acknowledged Martha’s anxiety “about many things,” but suggested that her priorities should be realigned – that “the better part” had been Mary’s, seated at His feet, open and receptive to His words.

Jesus’ refusal to intervene could have prompted two very different responses in Martha: her resentment may have increased, or she may have been persuaded to reflect on her priorities and adjust them accordingly. Which did she choose? Scripture offers insight in a subsequent passage placing the sisters in a far different scenario.

Some time later, the death of their brother Lazarus brought Jesus back to the home of Martha and Mary. The interchange between Jesus and Martha on that sad occasion was far more emotional than in their previous encounter, yet Martha’s words are proof that she had done some serious priority-shifting during the intervening time.

“Martha said to Jesus, ‘Lord, if you had been here, my brother would not have died. [But] even now I know that whatever you ask of God, God will give you.’

It is clear that Martha had come to understand the critical importance of the bottom line, summed up in one word – faith; a proper reordering of priorities. Obviously, she had advanced on her spiritual journey to such an extent that she could make the unwavering declaration which closes our passage.

We celebrate the feast of Saint Martha on July 29th. Appropriately enough, she is patroness of domestic workers, including homemakers, cooks, and dieticians. No matter our work, though, all can seek her help with that important task for overextended modern-day human beings – scrutinizing our priorities and resetting them appropriately. Admittedly, this is more difficult – and at the same time more necessary – in our fragmented, technology-driven world of today.

With Saint Martha’s example to guide us, though, we will be able to remember: Listen first, work later.