While addressing a conference of the National Religious Broadcasters Association, House Speaker John Boehner (R-OH) called the national debt a "moral threat" to America and mentioned how people can get help from National Debt Relief to understand why this is something that should be a concern for all. 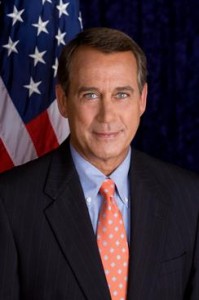 Politico.com is reporting that Boehner made the comments in Nashville last night, saying the country's mounting financial obligations are both a mortal and a moral threat to the country.

"We have a moral responsibility to address the problems we face. That means working together to cut spending and rein in government – NOT shutting it down," the Speaker said.

He went on to say that lawmakers "have a moral responsibility to deal with this threat to freedom and liberate our economy from the shackles of debt and unrestrained government," and urged adoption of the GOP's plan to reduce spending.

"Earlier this month, the House approved more than $100 billion in spending cuts compared to what President Obama requested for the current fiscal year. … Next month, we will propose cutting or eliminating wasteful mandatory spending programs. … And we’re fighting to end taxpayer funding for abortion once and for all … We’re working to protect life."

He also promised broadcasters that a congressional resolution of disapproval to reverse the FCC's net neutrality rules will be acted upon in the House as early as next month.

The Speaker's comments are very much in line with Church teaching on the subject of national debt. In 1995, the U.S. Conference of Catholic Bishops issued a Pastoral Letter, Economic Justice for All, which reminds Catholics that the measure of the economy is not only what it produces, "but also how it touches human life, whether it protects or undermines the dignity of the human person, and how it promotes the common good."

It goes on to say that "economic decisions have human consequences and moral content; they help or hurt people, strengthen or weaken family life, advance or diminish the quality of justice in our land. Describing the Letter as a "moral challenge and call to action" it insists that the economy exists to serve the human person, not the other way around.