By Susan Brinkmann, OCDS Staff Journalist A Catholic lay organization dedicated to encouraging faithful Catholics to participate in the political process is asking the U.S. Conference of Catholic Bishops (USCCB) to correct confusing statements made in the document, "Forming Consciences for Faithful Citizenship," that were distorted by dissenting groups in past elections. 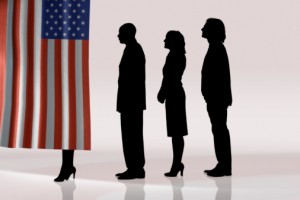 Deal Hudson and Matt Smith, the president and vice president of the Washington, DC-based Catholic Advocate, are calling upon the bishops to correct this document during their annual meeting in November.  "The 2008 version of 'Faithful Citizenship' contains several passages (Sections 34-37) that are capable of overly broad interpretation," they explain. "Groups like Catholics United and Catholic Democrats cherry-picked the following passage from Section 35 for prominent display on their web sites and in their printed materials: 'There may be times when a Catholic who rejects a candidate's unacceptable position may decide to vote for that candidate for other morally grave reasons. Voting in this way would be permissible only for truly grave moral reasons, not to advance narrow interests or partisan preferences or to ignore a fundamental moral evil.'" This passage was also frequently cited in parish discussions of "Faithful Citizenship" held across the nation's parishes in 2008. As Hudson and Smith point out, anyone who objected to this paragraph could have been referred to another, equally confusing citation, which states: "A Catholic cannot vote for a candidate who takes a position in favor of an intrinsic evil, such as abortion or racism, if the voter's intent is to support that position. In such cases a Catholic would be guilty of formal cooperation in grave evil. At the same time, a voter should not use a candidate's opposition to an intrinsic evil to justify indifference or inattentiveness to other important moral issues involving human life and dignity." "In other words, a Catholic could vote for a pro-abortion candidate as long as he or she did not intend to support his pro-abortion position," they explain. "What is a person to say to that? No one is capable of judging another person's intention. The practical consequence of this statement is clear: Catholics can vote for any pro-abortion politician they want - all they have to do is have the right intention." The next passage in the document only adds to the confusion about whether or not a Catholic voter can or cannot vote for a pro-abortion politician: "When all candidates hold a position in favor of an intrinsic evil, the conscientious voter faces a dilemma. The voter may decide to take the extraordinary step of not voting for any candidate or, after careful deliberation,may decide to vote for the candidate deemed less likely to advance such a morally flawed position and more likely to pursue other authentic human goods." A Catholic voter, therefore, can vote for pro-abortion politicians as long as they do not "advance" that "morally-flawed position" but would "pursue other authentic human goods," Hudson and Smith explain. They believe these sections contain three loopholes that allow Catholic voters to believe they can support pro-abortion politicians: 1. If they do not intend to support that position, or 2. if there are offsetting "morally grave reasons", or 3. if a candidate will pursue "authentic human goods" rather than the "morally-flawed" position he holds. In light of these loopholes, they wonder how Catholics voters are to make sense of the next paragraph: "In making these decisions, it is essential for Catholics to be guided by a well-formed conscience that recognizes that all issues do not carry the same moral weight and that the moral obligation to oppose intrinsically evil acts has a special claim on our consciences and our actions. These decisions should take into account a candidate's commitments, character, integrity, and ability to influence a given issue." Why should a Catholic voter feel the weighty obligation to oppose "intrinsically evil acts" when the bishops themselves provide three different loopholes to put that concern aside, they ask. Therefore, they want the bishops to answer one important question in the 2012 version of "Faithful Citizenship" - what exactly are the "grave moral" or "proportionate" reasons that would justify a Catholic voting for a pro-abortion candidate? Many bishops attempted to do this during the 2008 election, they said, such as Bishop Robert Vasa who pointed out that voting for a pro-abortion candidate is never justified when the opponent is pro-life. Similarly, Bishops Kevin Vann and Kevin Farrell insisted there are no "'truly grave moral' or 'proportionate' reasons, singularly or combined, that could outweigh the millions of innocent human lives that are directly killed by legal abortion each year." Catholic Advocate is calling upon the bishops to make these very necessary clarifications during their next annual meeting so that there will be no confusion during the critical 2012 presidential election. "If the bishops republish the 2008 version "Faithful Citizenship" for the 2012 election - without changes - they will be providing Catholic voters another carte blanche to cast their vote for any pro-abortion candidate they want. The incoherence of Sections 34-37 do not serve the building of a culture of life in our nation." © All Rights Reserved, Living His Life Abundantly®/Women of Grace®  http://www.womenofgrace.com