So how does he know? John Edward is the famous TV psychic medium who has made millions by convincing people that he can contact the dead.  He also claims to have discovered, through guided visualization, that he has five spirit guides as well as a master guide. On top of all those qualifications, he also claims to be a Catholic who has many priests and nuns for clients and who often prays the rosary before "making contact" with spirits on the "other side." (To his credit, he is honest enough to admit that the Church opposes what he does.) Edward was interviewed by Fox & Friends host Gretchen Carlson this week, who asked him if the recently deceased fitness giant, Jack LaLanne, could possibly be aware of the world's reaction to his death. " . . . When someone crosses over they are aware of the outpouring of love, thoughts, emotions, and that we miss them and that's why I believe they want to let us know they're around," Edward said. Carlson then asked if he believed LaLanne could continue to help people on earth lose weight even though he's now dead. Absolutely, Edward says. "I believe that when someone dies who is passionate about what they do and who they are, the energy of their legacy lives on both sides." Carlson then asked if there is political rhetoric in the afterworld similar to what we see here on earth. "Do people bicker with each other?" she asked. "No, I don't believe they do," Edward said. "I believe that world is devoid of some of the judgment that we deal with here once we cross over and we evolve to it. I think that here people say 'What side are you on? Are they rooting for . . .' [In the afterworld] they're rooting for the side of humanity, they're rooting on the side of not taking a side. They're rooting on making sure we get as close to unconditional love as possible." "So the afterworld is bipartisan," Carlson says. "It's more about not being fearful, not being controlling," he explained. "It's not about fear and control. It's a place of love and respect." Imagine that! Civility in the afterlife! It's hard to believe that such blatant chicanery is even allowed on the airwaves, but as I said, Edward has made a fine living for himself offering his services to the grieving.  What he's involved in is known as necromancy, which is a special mode of divination through the evocation of the dead. Derived from the old form of the name, nigromancy (niger meaning black) suggests it to be a form of “black” magic in which the workings of evil spirits are present. 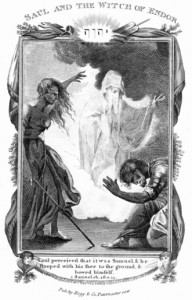 The practice or participation in necromancy is expressly forbidden by God in Scripture and for good reason; it’s dangerous on every level – spiritually, physically, and psychologically. It's fraught with such extreme dangers even some of the world's most celebrated mediums have warned people not to get involved in it. As Father Herbert Thurston S.J. writes in his book, The Church and Spiritualism, a celebrated London medium named Mrs. Travers Smith, who was once plagued by a spirit of suicide who repeatedly tried to possess her, warned that no one should attempt to contact spirits, especially not for fun. “You will draw to yourself earth-bound and still evil spirits . . . mischievous messages will follow and oft-times actual mental damage to yourself," she said. After compiling years of study on the subject, Fr. Thurston concluded that the overwhelming majority of spirits who speak to the living rarely speak the truth and are “freakish or impersonating spirits,” or what he calls “silly spirits” who deliberately mislead people. Apparently, there are vast minions of these spiritual clowns, he says, who for “pure sportive fun frequent circles, counterfeit manifestations, assume names and give erroneous and misleading information. . . . And yet, it is through channels such as these that spiritualists bid us seek the solution of the most profound mysteries of man’s existence and destiny.” If you're wondering what kind of harm can come from contacting the dead, Father Francesco Bamonte, an exorcist based in Rome and the author of The Damages of Spiritualism, has seen manifestations of all kinds of physical and mental problems in people who have dabbled in necromancy. He has seen physical manifestations such as strong stomach pains, pains in the forehead and bones, vomiting, epileptic fits, pins and needles in the legs, sudden attacks of heat or cold, increasing sense of anxiety, depressions, constant nervous tics, and being unable to eat. “There are still many more,” he said. “(The) inability to sleep night or day, inability to study or work. To be agitated, to have nightmares, to be afraid of the dark, to have sensations of being grabbed by the arms, or the sensation of someone sitting on our lap. One also feels invisible slaps and bites, as well as blows to the body.” This can also be accompanied by other phenomena such as becoming anti-social or addicted to drugs or alcohol. Others report feelings of being possessed by another personality and/or hearing voices that blaspheme and/or lead to suicide. Contacting the dead should not be mistaken for what Catholics do when they pray to Mary and the Saints for intercession. As Father Bamonte explains, when we pray for the intercession of the dead, we are invoking the dead, which means we are calling upon them for help. What spiritualists do is evoke the dead, which means they provoke normally invisible spirits to appear. “The dead can only manifest themselves to us by the free initiative of God, directly and never through techniques or mediums such as spiritualistic séances. For serious reasons, God can allow a dead person to appear to us, for example, to give us advice or at least a consoling presence, to ask for prayers or to express gratitude for prayers offered.” In other words, whoever – or whatever – is manifesting itself during a séance is probably not someone we want to be friendly with. Our Learn to Discern: Is It Christian or New Age series includes a booklet on psychics that explains all the "games" they play with public. For more information, click on the "New Age Resources" button on the navigation bar above.   Send your New Age question to newage@womenofgrace.com