By Susan Brinkmann, OCDS Staff Journalist Archbishop Allen Vigneron of Detroit has issued a cautionary letter to the clergy of his diocese about an upcoming conference being sponsored by the American Catholic Council (ACC), an umbrella organization comprised of some of the most radical dissident groups in the country. 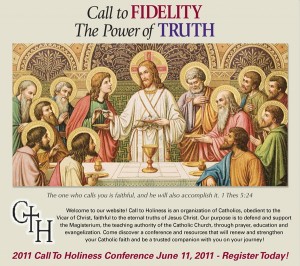 In the letter, Archbishop Vigneron said he has a number of concerns about the event, which will take place this weekend, but of particular concern is the Eucharistic liturgy the group plans for Pentecost Sunday. Aside from the fact that the group does not have his permission to celebrate Mass at the event, his requests for clarification about their plans for this liturgy have been ambiguous at best. "To confirm the legitimacy of what they had planned, the ACC had been asked to provide details regarding this liturgy,"he wrote. "The response received was ambiguous, and there are good reasons for believing forbidden concelebration will take place by the laity and with those not in full communion with the Church." He goes on to warn clergy about the grave consequences of participating in such a liturgy. "I am compelled to caution any priests or deacons who may be considering participation in this liturgy. It is not being celebrated with my permission as required by the law and the good order of the People of God. Further, clergy should be aware of the impact of forbidden concelebration with those who are not in full communion (canons 908 and 1365). This is a serious delict, for which recourse to the Congregation for the Doctrine of the Faith is required, and which may result in dismissal from the clerical state (cf. Sacramentorum Sanctitatis Tutela, 2001 and 2010)." Archbishop Vigneron has good cause for concern. According to the ACC's schedule for the conference, it includes speakers such as Matthew Fox, a defrocked Dominican priest turned New Age guru.  Jeannine Gramick, a nun who refused to obey a Vatican order to stop her controversial ministry to the homosexual community is also on the schedule and will host a workshop on "The Primacy of the Well-Formed Conscience." Other workshops will explore how women should be ordained as priests and deacons, and how the Church in America should be structured in a more "democratic" way with bishops being elected by the laity. In stark contrast to this celebration of dissent will be the Called to Holiness Conference which will take place at the same time and will feature EWTN's Jeff Cavins as Master of Ceremonies and keynote speaker Johnnette Benkovic, founder of the Women of Grace (R) program.  In stark contrast to the ACC event, Archbishop Vigneron called this conference "a powerful catalyst for growth in holiness and a deepened conviction about our need, particularly in these times, to persevere in fidelity to Jesus Christ . . ." He is also asking for the faithful to join him in praying for the unity of the Church. © All Rights Reserved, Living His Life Abundantly®/Women of Grace®  http://www.womenofgrace.com