By Susan Brinkmann, OCDS Staff Journalist New analysis by a researcher at the Center for Applied Research in the Apostolate (CARA) has found that the number of Catholic marriages celebrated in the Church has declined 60 percent since 1972. 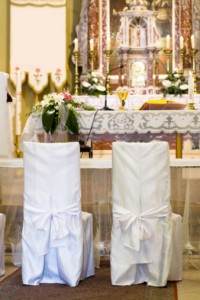 According to OSV Newsweekly, CARA researcher Mark M. Gray has found that Church marriages declined from 415,487 in 1972 to only 168,400 in 2010. This is in spite of the fact that the U.S. Catholic population actually increased by almost 17 million during that period of time.  One of the reasons for the decline is that more Catholics are choosing to marry outside the Church, but other factors are also at play. For instance, fewer Catholics are choosing to marry at all. The percentage of Catholics in the General Social Survey (GSS) who indicated that they are married dropped from 79 percent in 1972 to 53 percent in 2010. Among Catholics ages 18 to 40, this percentage dropped from 69 percent to 38 percent during this period. Some of this can be explained by Catholics waiting longer to marry, but the shift here has been slight, Gray writes. In 1972, the average age at first marriage reported in the GSS for Catholics ages 18 to 40 was 20.9. In 2006 (the last time this question was asked), it was 23.9. "Thus, the decline in Church marriages is more about not marrying at all than marrying older," he states. Divorce is another factor. The percentage of adult Catholics who are divorced, separated, divorced and remarried or widowed, increased from eight percent in 1972 to 22 percent in 2010. Some who divorce get remarried in civil ceremonies without seeking an annulment. These marriages are included in the total number of marriages in the U.S. but are not marriages that were celebrated in the Church. Another factor is the increasing number of marriages among Catholics to spouses of another faith.  Gray found that 78 percent of married Catholics ages 40 and younger had a Catholic spouse when polled by the GSS in 1991. This number dropped to 57 percent in 2008 with an increasing number of Catholics reporting a Protestant spouse (28%) or one with no religious affiliation (15%). However, he found that this number has much to do with how numerous other Catholics are in his or her community. "In 2009, in dioceses in which Catholics were about 10 percent of the total population, the average percentage of marriages in the Church between a Catholic and non-Catholic was 41 percent," Gray writes. "In dioceses in which 40 percent or more of the population was Catholic, only about 16 percent of marriages in the Church were interfaith." It's June, the time of year when many of us will be receiving wedding invitations, but we may notice one change from years past, Gray writes. "That the address on that invitation is for a country club, beach or community center rather than a Catholic parish." © All Rights Reserved, Living His Life Abundantly®/Women of Grace®  http://www.womenofgrace.com