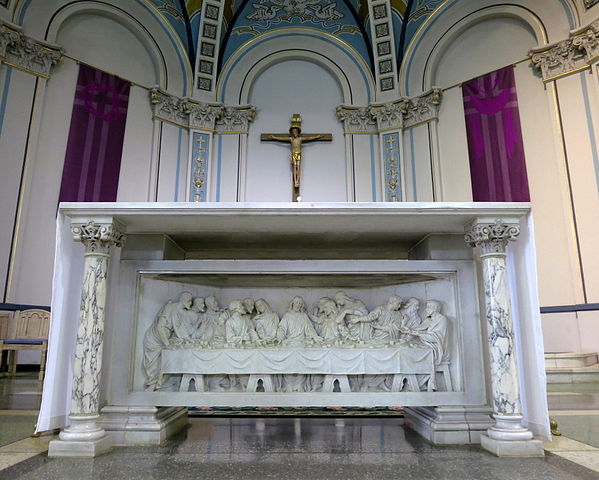 Archbishop Gregory Aymond of the Archdiocese of New Orleans has had the altar of Sts. Peter and Paul Church in Pearl River, Louisiana burned after a priest and two women were caught making a pornographic film on the altar.

The Catholic News Agency (CNA) is reporting that Father Travis Clark, 37, the former pastor of the parish, was arrested on September 30 on obscenity charges after he was caught filming himself and two women in a sexual act on the altar.

Father Clark was caught when a local resident noticed the lights on in the parish church and went to investigate. The resident looked through the window and saw that the altar had been outfitted with stage lighting while Father Clark and two women engaged in sexual acts on the altar.

Police reportedly removed sex toys, stage lights and two recording devices at the time of the arrest. Because the sexual encounter is believed to have been consensual, charges of sexual assault have not been filed. Instead, the trio are facing obscenity charges because the sex act was visible from a window.

The details of what went on in the church were not revealed until the court records were made public on Friday. The Archdiocese immediately released a video statement from the Archbishop in which he announced that Clark has been removed from ministry.

“His desecration of the altar in Church was demonic. I am infuriated by his actions. When the details became clear, we had the altar removed and burned. I will consecrate a new altar tomorrow,” Aymond said in the October 9 statement.

As CNA reports, “Aymond did not say whether Clark will face canonical charges. Canon law provides that a Catholic who profanes an altar can be punished with a ‘just penalty,’ and that a priest who has ‘committed an offense against the sixth commandment...publicly’ can be laicized.”

Archbishop Aymond burned the old altar and presented the parish with a new altar at the Vigil Mass on Saturday.

"His behavior was obscene. The desecration of this church and the altar is demonic -- demonic," Aymond said from the pulpit on Saturday. "There is no excuse for what took place here. It is sinful, and it is totally unacceptable. Travis has been unfaithful to his vocation, he has violated his commitment to celibacy and also he was using that which was holy to do demonic things."

He added: "When a church has been used for unholy things and it has been desecrated, we must drive away the evil spirit, and that is what we do today.”

Church-goers said they would pray for Clark who some describe as having been respectful, courteous, and humble.

Parishioner Steve Fecke was relieved to see the new altar in the church. He told FOX8: “It’s very difficult to read and hear some of the things that transpired on an altar so to me it’s a welcome change it’s a sign of maybe renewal for our church.”

He added: “I ask people to keep our parish and our...Catholic Church in their prayers."