By Susan Brinkmann, OCDS Staff Journalist The Bishop of San Diego is under fire for cancelling - and then reinstating - the right for a homosexual man living with a partner to have a Catholic funeral. 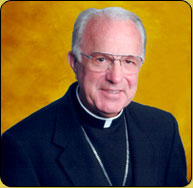 10News.com is reporting that Bishop Robert Brom of the Diocese of San Diego reversed an earlier decision made by Our Lady of the Rosary Church in Little Italy not to allow John Sanfilippo to have a Catholic funeral. Sanfilippo, who was living with his partner at the time of his death last week, was a long-time member of the parish who left a large sum of money to the church in his will. At first, the Sanfilippo's family was told that John could not have a Catholic funeral because he was an active homosexual, but that decision was overturned by the Diocese. In an email sent on Monday, Rodrigo Valdivia, the chancellor of the Roman Catholic Diocese of San Diego, told 10News, "The Diocesan office was notified about this situation earlier today... Diocesan authorities have concluded that the funeral as scheduled at Our Lady of the Rosary Parish may take place. Plans for the ritual are yet to be made." Nicole Murray-Ramirez, Sanfilippo's friend, led a small group in prayer outside Our Lady of the Rosary on Monday and taped a letter addressed to Bishop Brom to the front door of the church. The letter is asking the bishop to clarify the church's position on funerals for gay parishioners. "Are there going to be others that are going to be denied in the future? Will we have to go through this again?" asked Ramirez. A similar spat erupted in 2005 when John McCusker, a gay businessman, passed away and was not permitted to have a funeral in any Catholic church in the diocese. McCusker's family moved the funeral to an Episocopal church and eventually converted to Protestantism because of the way they were treated. Bishop Brom later apologized to the family. Friends at the cocktail lounge that Sanfilippo owned for 28 years are outraged by what some are calling a confusing statement from the San Diego diocese. "All of a sudden, they change their mind and say, 'Well, you know, we may still allow the funeral to be here.' Why? Because they got caught in the process of denying equal rights to people?" asked Neil Thomas, a friend and customer of Sanfilippo's. As for Sanfilippo's family, Thomas says they no longer want the service to be held at Our Lady of the Rosary. The funeral will be held tomorrow morning at Holy Cross Cemetery and Mausoleum. No one from Our Lady of the Rosary was available for comment. © All Rights Reserved, Living His Life Abundantly®/Women of Grace®  http://www.womenofgrace.com