By Susan Brinkmann, OCDS Staff Journalist The plight of Baby Joseph Maraachli, whose family wants to bring the terminally ill child home to die, remains in limbo as the family's new lawyer plans to appeal the case to Canada's highest court, and the hospital is refusing to release medical records to doctors in Michigan who are willing to help. 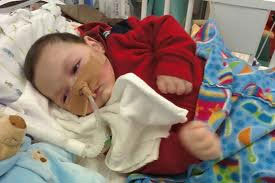 LifeSiteNews.com is reporting that Claudio Martini, the Maraachli's new attorney, has filed an appeal with Canada's highest court to overturn the Feb. 17 decision of a lower court that backed the hospital's decision to remove Joseph's life support. Joseph, who is 13 months old, is suffering from a terminal neurological disease and has difficulty breathing on his own. The family, who had a daughter die of the same condition several years ago, wants the hospital to perform a tracheostomy on Joseph so they can take him off the ventilator and bring him home. Thus far, the hospital has refused to cooperate with the family's wishes. Father Frank Pavone, director of Priest for Life, said his team has spoken to doctors in Michigan who are willing to oversee Joseph's outpatient care and would assist in weaning him off a home ventilator if necessary, but the hospital is refusing to release the child's medical records. "This is what is preventing hospitals in the United States from being able to accept Baby Joseph," Fr. Pavone said in a recent e-mail. "We need those medical records! And we need them now!" He is also trying to clear up the many false reports and rumors circulating in the media that Baby Joseph is in a persistent vegetative state. "He's not," Fr. Pavone states. "He's only 13 months old, and simply isn't getting the care he needs. Any baby would suffer if not given proper care. So please don't listen to the same kind of lies and distortions that caused Terri Schiavo's untimely death. This is why it so important that the medical records are released so the truth can come out." Fr. Pavone is urging people to contact the authorities who oversee the hospital where Joseph is being kept to request that his medical records be released immediately. © All Rights Reserved, Living His Life Abundantly®/Women of Grace®  http://www.womenofgrace.com