A high school health teacher in California deducted 25 points from a student’s grade because he caused an “interruption of class time” by saying “bless you” to a fellow student. 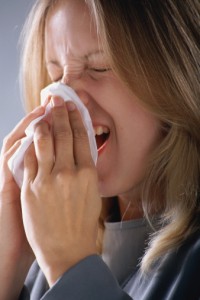 The ChristianPost is reporting that Steve Cuckovich, a teacher at William C. Wood High School in Vacaville, California, said the student disrupted his classroom when he said “bless you” to another student who sneezed.

“It’s not … got anything to do with religion,” Cuckovich told KTXL News in Sacramento. “It’s got to do with an interruption of class time.”

Cuckovich needs to brush up on his history. Pope Gregory the Great was the first to utter the phrase “God bless you” after a sneeze. It was during the height of the bubonic plague in the sixth century and a sneeze was one of the early symptoms of the disease so the use of the phrase was more a prayer for the person’s health. Use of similar phrases to wish a person good health can be found in many other cultures, such as Germany where sneezes are greeted with the term, “gesundheit” which means “health.” People in Arabic countries say “Alhamdulillah” which means “praise be to God” and Hindu’s say, “Live!” or “Live well.”

To be sure, the various sneeze responses may have originated in superstitions such as the one Cuckovich cites, as well as the belief that the heart momentarily stops during a sneeze and that saying “bless you” was a way of praying for them or welcoming them back to life. But the phrase is generally considered to be a courtesy in today’s society.

In other words, there are a variety of reasons why people might be saying “bless you” to someone who sneezes other than for reasons of religion. Cuckovich appears to have jumped to conclusions, then issued an excessively harsh punishment on the student based on those assumptions. Instead of issuing a warning, he deducted a full 25 points off the student’s grade, believing this would be a good way to deter other students from saying “bless you” or using other religious phrases in class that he found offensive.

It’s not at all surprising that parents of Woods High students found Cuckovich’s response to such an innocent expression to be extreme.

Wood High Principal Cliff McGraw agreed that Cuckovich went overboard in his punishment. “He realizes he there’s better ways to do that,” McGraw said. “We don’t condone that kind of punishment.”

However, this doesn’t mean Cuckovich will stop punishing students for using Christian saying in his class. He will just find less severe ways to punish them.

As troubling as this story is, the bigger picture is even more disturbing. This is just one of several recent episodes in California that reveal a growing anti-Christian, anti-religion bigotry growing within the state’s public schools. Earlier this month, the ultra-liberal 9th U.S. Circuit of Appeals sided with school officials in Poway, California who ordered a high school math teacher to remove patriotic banners from his room that said “God Bless America” and “In God We Trust.” The banners hung in his classroom for 25 years before the principal decided they were in violation of the Establishment Clause.

Another case occurred a few months ago when a 16-year-old high school student in El Cajon, California was forced to sue the local school district after being suspended two days last year for bringing his bible to school and sharing his faith with interested classmates.

What makes these cases so egregious is that they occurred at the same time that liberal lawmakers in the state passed a new law, SB48. This law not only mandates the use of textbooks that include the role and contributions of homosexuals and transgenders, but it also forbids a school to sponsor any activity that “promotes a discriminatory bias” toward homosexuality, such as the Boy Scouts and traditional religious clubs.

The only people who don’t see what’s wrong with this picture are those who don’t want to.