A diet doctor from North Carolina has created a Facebook page known as “Jesus Daily” with the goal of converting 50,000 people this year, and more than eight million fans are already on board. 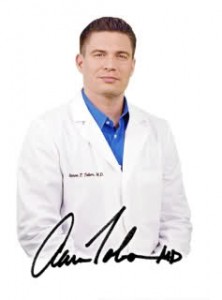 The New York Times is reporting that the page was created by Aaron Tabor, 41, a successful diet doctor who says he grew up listening to his father preach in Alabama churches. He started a “Jesus Daily” Facebook page in April of 2009 as a hobby and posts the words of Jesus four or five times a day.

With more than eight million followers to date, in just the past three months more people have “liked” the page than any other on Facebook, including the page of popular teen star Justin Bieber. The Times reports that the page counted 3.4 million interactions last week compared with just 630,000 interactions for Bieber’s page, which draws 35 million fans.

“I wanted to provide people with encouragement,” said Tabor, who keeps up a separate page for his diet business where he markets soy shakes, protein bars and supplements. “And I thought I would give it a news spin by calling it daily.”

According to Facebook, religion is all over their pages. They report that 31 percent of all Facebook users in the United States list a religion in their profile, as do 24 percent of users outside the United States.  In addition, more than 43 million people on Facebook are fans of at least one page categorized as religious.

This could explain why Tabor’s page isn’t the only Christian site that ranks among the reigning Facebook giants. The Times reports that an analysis done by AllFacebook.com shows that the The Bible Facebook page, which is run by the United Bible Societies in Reading, England, has eight million fans and beat Mr. Bieber with about a million interactions.

Even though religious institutions are known to use Facebook to troll for new members, pages such as “Jesus Daily” are also attracting people who are not affiliated with any particular church, which raises the question of whether or not they might be substituting attendance at church with “friending” a social media site. Pope Benedict XVI recently warned about using social media in this way, saying that while it offers “great opportunity,” virtual contact “cannot and must not take the place of direct human contact with people at every level of our lives.”

For now, Dr. Tabor says he is content to let “Jesus Daily” continue as his hobby.

“I want it to be about encouragement,” he told the Times. “There are so many people battling cancer, fighting to keep their marriages together, struggling to restore relationships with their children. There are people out of work, at the end of the line and I just want the Jesus Daily to be a central place where they find encouragement, no matter what battle they are fighting.”