Acting under the direction of a gay activist group, a lesbian couple from Nashville, Tennessee have logged an official complaint with Dolly Parton’s family theme park after one of the women, who was wearing a “Marriage is so gay” t-shirt, was asked to turn it inside out to avoid offending guests. 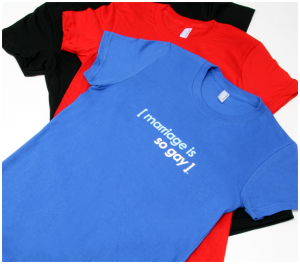 The Associated Press (AP) is reporting that Olivier Odom and Jennifer Tipton visited the park on July 9 with their friends’ two children and were stopped at the gate by a staff member. Odom, who was wearing the shirt, was asked to turn it inside out because it was a family park. She claims she complied only because she didn’t want to make a scene in front of the children, but that she felt offended.

“That’s what we found so offensive — that he said it was a family park,” Tipton told the AP. “Families come in a wide range of definitions these days and we were with our family.”

The couple, who are not married, said they believed it was their duty to write a letter of complaint to the park.

The Christian Post is reporting that they did so under the advice of a newly launched gay activist group known as Campaign for Southern Equality. The letter was published online in the Censorship in America blog and several gay advocacy media sites earlier this week.

“To ensure that your customers are not treated this way in the future, I would like to see Dollywood implement policies that are inclusive of lesbian, gay, bisexual and transgender (LGBT) people; conduct staff sensitivity training; and issue a public statement indicating that the park is inclusive of all families,” Odom wrote.

Dollywood officials say the incident is being misunderstood as discrimination and claims it is a matter of the park’s dress code policy which is strictly enforced.

“Thousands of times a day our front gate hosts are asked to enforce our dress code policy,” Dollywood spokesperson, Pete Owens, told The Advocate. “It doesn’t have anything to do with who the people are or what their belief system is or with anything other than the fact that we try to prevent as best as we can upon entry of the park one of our guests being offended by something someone else is wearing.”

The park’s policy states: “To preserve our family atmosphere proper clothing is required including shirts and shoes (sandals or flip-flops are acceptable). Clothing with offensive words and/or pictures will not be permitted inside the park. . . . Dollywood reserves the right to require additional or different attire where we deem appropriate.”

The t-shirt Odom was wearing is made by ISSO, a company that is donating a portion of the proceeds from the sale of the shirts to organizations that support marriage equality.

Dollywood officials say they plan to contact the couple to discuss their complaint.