New York Archbishop Dolan’s fears that same-sex marriage laws will lead to the acceptance of polygamy will come one step closer to reality tomorrow when lawyers representing the polygamist stars of “Sister Wives” file a lawsuit challenging Utah’s bigamy law – a case believed to be the “strongest factual and legal basis for a challenge to the criminalization of polygamy” ever filed in the federal courts. 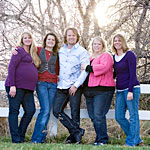 The Associated Press (AP) is reporting that Sister Wives stars Kody Brown and his four wives – Meri, Janelle, Christine and Robyn – are suing the state and challenging their right to prosecute people for their personal relationships.

“We are not demanding the recognition of polygamous marriage. We are only challenging the right of the state to prosecute people for their private relations and demanding equal treatment with other citizens in living their lives according to their own beliefs,” said Jonathan Turley, the lawyer representing the Browns.

The lawsuit is seeking to protect a person’s right to be left alone, Turley said in a statement posted on his blog.

“In that sense, it is a challenge designed to benefit not just polygamists but all citizens who wish to live their lives according to their own values — even if those values run counter to those of the majority in the state,” Mr. Turley wrote.

Mr. Turley said he believes the case represents the “strongest factual and legal basis for a challenge to the criminalization of polygamy” ever filed in the federal courts.

The Browns, who have 16 children, recently moved out of Utah and fled to Nevada after their appearances on the TLC reality show prompted a bigamy investigation by local police and Utah County prosecutors. Bigamy is a third-degree felony in the state and a person can be found guilty of the crime through cohabitation as well as legal marriage records. In the eyes of the law, Brown is only legally married to Meri. Thus far, no charges have been filed.

The AP reports that the last time the state of Utah prosecuted a polygamist was in 2001 when it convicted Tom Green, who was married to five women. Like the Browns, Green promoted his lifestyle on national TV shows. He spent six years in prison and was released in 2007.

The practice of polygamy in Utah originated in the teachings of Joseph Smith, the founder of the Church of Jesus Christ of Latter-day Saints, but was outlawed in the 1890s when Utah became a state. Today, there are an estimated 38,000 Mormon fundamentalists still practicing polygamy, most of whom keep their way of life secret out of fear of prosecution.

When the Browns decided to make their life public on a reality show, they knew they were taking a risk but felt that it would help advance the broader understanding of “plural” families.

“There are tens of thousands of plural families in Utah and other states,” Kody Brown said in a statement released through Turley’s office. “We are one of those families. We only wish to live our private lives according our beliefs. While we understand that this may be a long struggle in court, it has already been a long struggle for my family and other plural families to end the stereotypes and unfair treatment given consensual polygamy.”

The Browns suit comes just days after New York’s Archbishop Timothy Dolan issued a warning on his blog that same-sex marriage would open the door for those seeking to decriminalize bigamy and adultery.

“And  now we ring the steeple bell again at this latest dilution of the authentic understanding of marriage, worried that the next step will be another redefinition to justify multiple partners and infidelity.”

His words were indeed prophetic!