Chicago police are looking for the person(s) who entered a warehouse late Saturday night or early Sunday morning and cut the tires on all 51 floats destined for this weekend’s “Gay Pride” Parade. 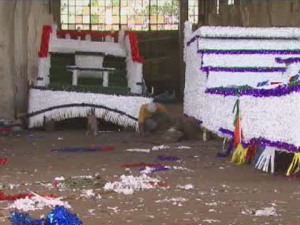 CBS is reporting that someone gained access to the building where 51 floats were being stored in anticipation of Sunday’s parade and slit the tires on every one.

“They didn’t single out one float. They did them all,” said Chuck Huser, owner of a parade float business known as Associated Attractions Enterprises Inc. where the floats were being housed.

Huser said he and his staff arrived around 5:00 a.m. on Sunday morning to start pulling out the floats and found them all leaning to one side. Upon closer inspection, they found that each float had a slashed tire.

All except three of the floats were able to be repaired on time for the parade.

Police are not investigating the vandalism as a hate crime because no message was left behind at the scene.

Parade coordinator Richard Pfeiffer also believes it was a hate crime and sees no other reason why the vandalism would have occurred the night before the parade.

“And it just speaks to, people say, ‘Gee, the LGBT community has come so far,’ and we have,” Pfeiffer said. “But if you have people who are doing something like this, maybe we haven’t reached the hearts of everybody yet.”

This was certainly evident in regard to the citizens who commented on the story on the CBS Chicago site.

On commenter, named Frank, asks: “A hate crime? Maybe. Most likely someone who is thoroughly offended by the whole concept. Why does this group of people feel the need to prance around in a parade acting like a bunch of fools. Why can’t they keep their sexual preference in the bedroom where it belongs, like normal people? What are children to be told when asking about it? I think this was probably a crime of disgust, more than anything else.”

Jimbo agreed with him. “That does make the most sense. I saw these people on TV last night and I was offended to say the least. I normally could care less what people do in their private lives, but a parade is not private. I saw men dressed like women acting all girly, disgusting. If they don’t like criticism, then keep the abnormalities private, where regular people don’t have to see it.”

Photo of the damaged floats was taken by CBS.