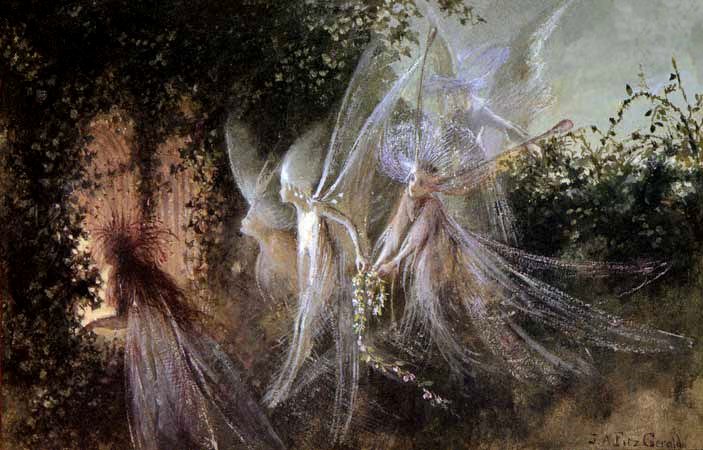 MR writes: “Our kindergarten son’s music teacher plays a rap song where the boys are told to “hiss like a snake”  and a song about fairies also.  Our son refuses to participate in either song.  He raised his hand and said that there are no such things as ‘fairies’ to which the class, the kindergarten teacher and the music teacher all agreed that there were fairies.  We always wanted to give God the glory for everything we celebrate so we taught our son that his Guardian angel brings a gift from God under his pillow. . . .”

MR continues: “One would think it would not turn into a big argument in class for a ‘seemingly’ silly matter. Since then he has been teased and excluded and it’s making him sad and angry.  Do you have any info on fairies in the new age realm that we could pass on to the teachers about why we should not be chastised for NOT teaching our child about fairies?”

What MR doesn’t reveal in this e-mail (but was included in the subject line of his correspondence to me) is that his son is being bullied in a CATHOLIC school for not professing a pagan belief! I would definitely give serious thought to either finding another school for this child or checking with the principle to find out why he or she is permitting kindergarten teachers to introduce Cathoilc schoolchildren to occult beliefs.

The reason I say this is because fairies are the invention of neopagans and New Agers. This is just one of many names they have invented for spirits – others include “ascended masters,” “avatars,” and the most commonly known “spirit guide.” While New Agers consider these beings to be angels, they bear no resemblance to the messengers of God found in Scripture. Rather, these are spirits who are at the beck and call of an individual, often visiting them in their dreams (or in the garden, as in fairy lore) to help them work out their lives through a variety of magical devices.

We Christians have mountains of data from the Bible, tradition and historical accounts to support the existence of the angels who are in the service of God. But the only proof New Agers can give about the existence of beings such as fairies are children’s fairy tales or the prophecies of channelers and psychics such as J.Z. Knight who claims a 35,000 year-old warrior named Ramtha appeared in her kitchen one day and revealed all the secrets of the universe. (How’s that for a “credible” source?)

Neopagans and New Agers may not be willing to accept the proof we offer for our beliefs because they reject the Bible, but in doing so they choose to believe in the unproven fancies of just about anyone who chooses to utter them rather than in one of the most revered and studied books in the history of mankind. (And one that has plenty of scientific and historic credibility.)

Or perhaps they’re putting their faith in the old Cottingley Fairy story that turned out to be the invention of two mischievous English girls in the early part of the last century. Believe it or not, many people still believe this story is true.

It involves Elsie Wright, 16, and Frances Griffiths, 9, who insisted that they regularly saw fairies at their home in Cottingley, England around 1917. One day, the girls borrowed a camera and supposedly photographed the fairies which anyone with halfway decent eyesight can see are fake.

But Elsie’s mother thought it was real and brought it the attention of Edward Gardner of the Bradford Theosophical Society (theosophists practice a combination of mystical and occult philosophies). Gardner was impressed and supposedly supervised the girls in taking more photos of the fairies, which created a sensation at the time. Even Arthur Conan Doyle was drawn into the excitement, publishing a book about the subject entitled The Coming of the Fairies in 1922.

It’s interesting to note that in the teachings of Theosophy, fairies are actually a less evolved version of beings known as Devas, which are any of a number of spiritual forces believed to be behind nature. They allegedly exist in the atmosphere of planets throughout the solar system and are believed to help guide the operation of nature. Devas are said to appear as colored flames about the size of a human being, with a fairy appearing as a smaller more human-like version. Theosophists believe the only way a Devas or fairy can be seen is when the third eye is activated (the third eye is associated with psychic powers).

Of course, there is no proof of the existence of devas – or fairies for that matter.

However, the problem with all this is that anyone who has read even an elementary level book in spiritism will tell you that evil spirits are more than happy to masquerade in whatever guise you are willing to receive them – as a fairy, a gnome, dead relative, “spirit guide” or whatever. (There is also plenty of testimony from the world’s most famous mediums who say the same thing – Thurston, H. S.J., The Church and Spiritualism). This is also why Scripture strictly forbids the conjuring of spirits (Deuteronomy 18) because it exposes the soul to the influence of demons.

For this reason, if the teacher is encouraging children to communicate with fairies in any way, he or she should be stopped immediately, as this could be endangering your child’s soul.

Having said all this, it is completely beyond-the-pale that a Catholic school teacher would allow your son to be teased and ostracized for not adopting a pagan belief. I would not hesitate to bring this matter to the attention of the principal and, if no satisfaction can be had, to your local bishop and/or superintendent of schools.