AE writes: “Here is one subject that I hope you will write an article about: ear candling.  Not only should people be aware that ear candling is a nightmare for audiologists and ENTs because of so many people who end up burning themselves, but it’s pretty much quackery that’s been promoted by “holistic healing” gurus.  Even though the FDA has banned ear candles, I still see them being sold at even pharmacy chains.” 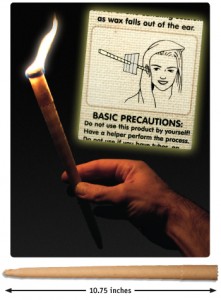 Ear candling or coning, is said to be the cure for everything from clearing the sinuses to purifying the blood – and all for as low as $3! But does it work?

No – and it’s dangerous besides.

This “ancient” home remedy involves placing a cone-shaped device (looks like a hollow candle) in the ear canal and supposedly extracting earwax and other impurities with the help of smoke or a burning wick. The procedure allegedly creates a kind of vacuum that draws wax and other debris and impurities out of the inner ear, facial sinuses, and even the brain itself.

Ear candling is considered to be a pseudoscience because there is no scientific evidence to support its claims. Testing has shown that there is no way that the candle could produce a vacuum powerful enough to draw anything out of the ear, or create a temperature hot enough to “melt” earwax as is sometimes claimed.

Regardless of these facts, purveyors of “holistic” and “natural” remedies still believe in candling and cite its ancient roots as proof of its legitimacy.

According to their history, ancient Egyptians are said to have practiced candling and used papyrus or clay cones to guide the smoke into the ear canal. American Indians are also said to have employed the practice to relieve head congestion by using reeds gathered from riverbanks or cornhusks dipped in wax. The Greeks used it to evoke mental clarity and the Mesoamerican cultures of the Maya and Aztec used it for therapeutic and ritual purposes.

Today, most candles are made from a strip of material wrapped into a cone or tube shape and dipped in either food-grade paraffin or a beeswax blend. Some companies put herbal additives in their wax. The different materials, waxes and additives are said to affect how the candle burns and how effective it is.

One practitioner’s website, which was forwarded to us by AE, describes a typical treatment:

“One end of a cylinder or cone of waxed cloth is placed into the subject’s ear, and the other end lighted. Usually the subject is lying on one side with the treated ear uppermost and the candle vertical, perhaps stuck through a paper plate or aluminum pie tin to protect against any hot wax or ash falling down the side. A typical ear candling session can last up to 45 minutes, during which time a series of 1 or 2 ear candles may be burned for each ear. The experience is generally described as being unusual, but pleasant and relaxing. One may hear some crackling and popping, or feel some heat during the ear candling session.”

Other people feel pain – such as this person who wrote to Quackwatch to describe what happened to him during a candling session:

“I wish I had found your website earlier! I too used an ear candle and had disastrous results! An hour after candling, I developed a terrible earache and experienced hearing loss. My eardrums and ear canals felt like they had horrible burns.

“I waited a week, in hopes that the ear pain would stop and my hearing would return to normal. When this didn’t happen, I went to a see an Ear Doctor. My eardrums and canals were extremely red, irritated and burned. Wax from the ear candle was found on one of my eardrums and had to be scrapped and suctioned off at the doctor’s office. A very painful procedure on sensitive burnt ears! An ear infection had also set in, requiring prescriptions drugs of a decongestant, an antibiotic and a steroid.

“I had temporary hearing loss for several weeks due to one use of ear candles. My normal hearing is excellent.  After using the ear candles a hearing test showed that my hearing had dropped to below normal hearing levels! After a month of treatment and a lot of ear pain, my hearing finally returned to it’s normal level.

“I hope that this dangerous product is banned so that other people are not also harmed by them!”

Thankfully, the FDA has taken action against the manufacturers of ear candles in both the U.S. and Canada. These actions have included import alerts (these are notifications to agency field personnel that a product is suspected of violating the law), seizures, injunctions and warning letters. In February 2010, they issued warning letters to three large manufacturers of ear candles. These firms were informed that the FDA had determined that there was no agency approval or clearance, no manufacturing facility registration or device listing, and no adverse-event reporting systems in place in regard to their ear candles.

In this notice dated February 18, 2010, the FDA is promising to continue to take enforcement action whenever and wherever it is appropriate.

One last warning about candling – many of the practitioners are also involved in the New Age – which is yet another reason why this procedure should be avoided at all costs!