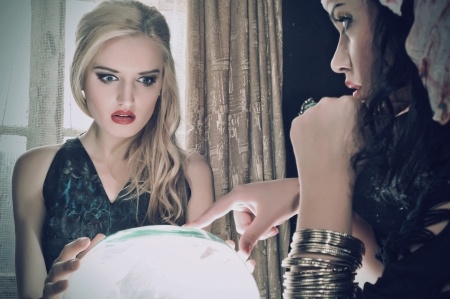 A mother and daughter psychic team, who called themselves “white squaw Cherokee Indian” spiritual healers, have been jailed after bilking two clients out of more than a million dollars.

The Sun Sentinel is reporting on the pair, Annie Marie Vwanawick, 74, and her  daughter, April Miller, 44, of Florida, who were sentenced to 42 months and 27 months in prison respectively after defrauding a woman out of more than $1.4 million and another for almost $10,000.

According to one victim, known only as Mrs. O., the relationship got started in 2009 when she met Miller in a nail salon. Mrs. O. was going through a difficult divorce at the time and Miller offered the “spiritual healing” services of her mother.

What was supposed to have brought her comfort only brought her more anxiety when Miller and Vwanawick convinced her that her life was cursed and that her ex-husband was a demon. The pair offered to keep the curse at bay through pricey spiritual “services.”

When Mrs. O. won money from her husband in a divorce settlement, the pair convinced her that the money was “cursed” and that she needed to give it to them, in the form of cash, for “cleansing.”

Later, when Mrs. O.’s ex-husband died of alcoholism, Miller and her mother told her that he had become a powerful demon and that she needed to turn over all of the jewelry that he had given her for “cleansing.”

“They swore in Jesus’ name that the money would be returned,” Mrs. O. told U.S. District Judge Kenneth Marra at the West Palm Beach courthouse.

Vwanawick and Miller only returned $100,000 and claimed the remainder had been spent.

The second victim, identified only as Mr. A., told the judge that he was defrauded after encountering the psychics during a time when his business was failing.

The psychic’s defense lawyer tried to argue that Vwanawick and Miller’s ancestral link to gypsies was a mitigating circumstance and cited Vwanawick’s advanced age for giving her a lenient sentence.

However, the judge was not moved. Vwanawick’s past prosecutions for similar instances of fraud were enough reason to hand down a stiff sentence of 3.5 years behind bars. Miller will serve a little more than two years for her involvement.

In spite of the poor reputation of this nefarious trade, the psychic industry in the United States is booming. Since 2005, revenues have grown by 52 percent to a whopping 2.2 billion as of 2018.

According to a report by IBIS World, “The Psychic Services industry has grown steadily over the five years to 2019 as a result of improved economic conditions and growing acceptance of industry services among consumers.”

This “growing acceptance” is the inclination of our society to move away from the Judeo-Christian values upon which it was founded and to be more accepting of non-Christian and even occult-based spiritual practices.

In addition, psychics have done a good job of peddling their wares over the Internet and on social media, which partially explains the rapid rise in popularity for this dark art that relies mostly on sham artistry with assistance from diabolical agencies.

The merging of these trends, in spite of the vast history of fraud associated with psychics, has led to quite a boon for the trade. As IBIS reports, “…[I]ndustry revenue is projected to rise an annualized 1.6% over the five years to 2019 to total $2.2 billion, including a forecast 1.3% jump in 2019,” the report states.

It’s easy to blame those who go to these charlatans for advice, but anyone who has gone through a dark time in their life – a difficult divorce, loss of a loved one, financial duress – knows that when our emotions are running amok it’s very difficult to think clearly. We’re desperate and want help wherever we can find it, often putting our best judgement aside for what appears to be a way to end our suffering. The enemy, acting through his various agencies in the world, is always waiting to take advantage of us during these vulnerable moments.

The case of Vwanawick and Miller are just one of thousands of examples of why the Christian should never partake of these services, for the good of both their financial and spiritual health.