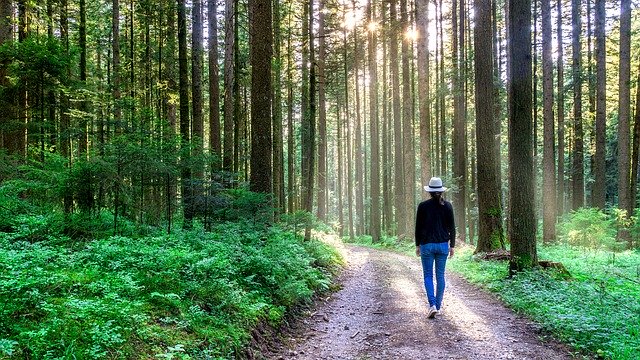 Anyone who has ever gone on a Catholic retreat knows that giving retreatants a break to enjoy the outdoors and meditate on the beauty of God’s creation is a regular part of most programs. There is certainly nothing wrong with getting outside and soaking in the sunshine and fresh air, but this new fad known as Meditative Forest Bathing involves non-Christian elements that need to be addressed.

For those who have never heard of it, meditative forest bathing is all about taking time off to wander through a forest and let your five senses enjoy the outdoors. In Japan, it’s called shinrin (forest) yoku (bathe) which means, according to the website, to “take in the forest atmosphere” or to “forest bathe.”

There is plenty of solid scientific evidence to support the fact that spending time outdoors is good for our overall health and there is certainly no problem with Catholics enjoying nature in this way. Known as nature or eco therapy, this can include anything from gardening to swimming in the ocean.

However, the shinrin approach to forest bathing, which comes with the innocuous “Meditative Forest Bathing” label, is actually hiding much more than just a stroll through the woods.

According to the site, their version is taught by the Association of Nature and Forest Therapy Guides and Programs which was founded by a former nature guide named Amos Clifford. As his bio states, Clifford is a practitioner of Zen meditation and was a student of Buddhist philosophy for over 20 years. He also founded the Sky Creek Dharma Center in Chico, California where he has taught Zen meditation to youth. His Zen practice has now morphed into the practice of Forest Therapy and his association is one of the largest promoters of forest bathing programs in the world.

The influence of Zen is all over this form of forest bathing, which “combines leisurely walks on gentle paths under forest canopy with guided activities to help you open your senses, hone your intuition, and experience the forest as you never have before. We draw upon mindfulness meditation practices, and the techniques of deep nature connection mentoring.”

Catholics need to use discretion before becoming involved in any kind of nature-related spiritual activity because too many Catholic retreat houses promote what’s known as eco spirituality. This is based on the non-Christian belief that the earth is a living being and that connecting with it will somehow put one in tune with the whole universe.

As this site explains, “From the ecospiritual perspective, Ultimate Reality (God, Spirit, Buddha and/or the Divine,) is not just the source of creation it is very much also a part of creation; a part with which we can interact on a daily basis through our senses and from such experiences gain greater insight into the wonder of reality . . . Furthermore, eco-spirituality understands the position of human beings to be inextricably related to all other life forms within an interrelated, interconnected web that is part of the Divine’s dance of life.”

This worldview is based upon a combination of pantheism (God is all in all) and animism which is a belief that inanimate objects have a consciousness and a soul. Common to most indigenous religions around the world, it also posits the belief that humans are nothing special and are just part of the overall fabric of life. These beliefs run counter to the Christian belief that humans were created in the image and likeness of Godt.

Archbishop Norberto Carrera warns in his document, A Call to Vigilance, ”eco spirituality “loses the notion of a personal God, really distinct and superior to the created world, in favor of an impersonal divine force that is everything and is in everything. This return to naturalistc pantheism, which was definitively overcome by the event of Christian revelation, finds support in many new religious movements coming from the East and in a return to pagan religions.”

Catholic retreat houses in the United States are loaded with New Age and even pagan offerings. This is why the faithful should always review the complete offerings of a retreat center to be sure they are not promoting New Age ideas.

Personally, I try to avoid attending any retreat, even one that is authentically Catholic, at a center that promotes New Age ideas in their other offerings simply because I do not wish to offer them any financial support.