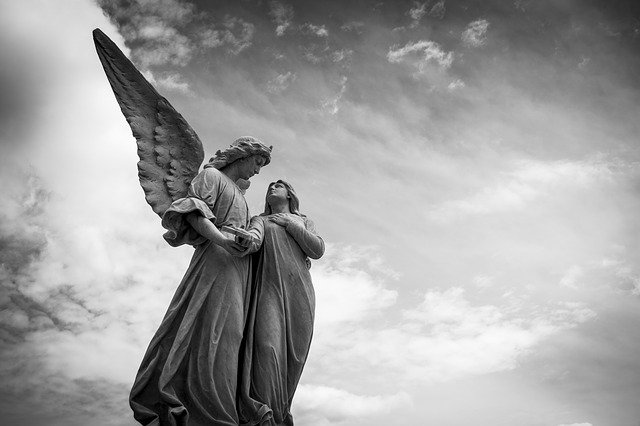 SMB asks: “I don’t understand the difference between an angel and a spirit guide. Aren’t they the same thing?”

Absolutely not. An angel is a pure spirit created by God to serve as a “ministering spirit sent to serve, for the sake of those who are to inherit salvation” (Hebrews 1:14). A spirit guide is a spiritual entity that is considered in New Age circles to be either the spirit of a deceased human, an Ascended Master, Elemental Energy or even the spirit of an animal. Although often referred to as an “angel” by New Age practitioners, this label is a clever deception that has led many unwitting Christians into the occult.

It’s important to understand the dramatic difference between these two entities which sometimes sound very similar, depending on what you’re reading.

The Catechism makes it quite clear what an angel is, “…As purely spiritual creatures angels have intelligence and will: they are personal and immortal creatures, surpassing in perfection all visible creatures, as the splendor of their glory bears witness” [No.330].

It goes on to make a very critical point: “Christ is the center of the angelic world. They are his angels…They belong to him because they were created through and for him…They belong to him still more because he has made them messengers of his saving plan” [No. 331 emphasis in original].

In other words, an angel’s job is to lead us to the salvation won for us by Jesus Christ. This is a job they are equipped to do with a terrifying power. As Jesus promises in Matthew 13:41, “The Son of Man will send his angels and they will collect out of his kingdom all who cause others to sin and all evildoers.”

A few verses later, he reiterates that at the end of the Age, “The angels will go out and separate the wicked from the righteous and throw them into the fiery furnace where there sill be wailing and grinding of teeth” (Matt 13:49).

It’s plain to see that real angels are about the very important business of saving souls while the fallen angels – demons – are about just the opposite which is leading them astray. We can see how cleverly they do this with the New Age version of angels known as “spirit guides.”

For example, in theosophical doctrine, a spirit guide can be “energy” or “light beings” or even persons who lived former lives but are now paying their karmic debts.

Theosophy Wiki refers to spirit guides as “controls” or “entities thought to remain as disincarnate spirits, acting as a teacher or protector of the living medium. In this view, spirit guides can include dead people, saints or other enlightened individuals, gods, angels, nature spirits, and even animals.”

In the New Age, spirit guides play essential roles in a variety of occult-based practices such as in Reiki which involves the assignment of a spirit guide during the attunement process. Thereafter, the practitioner relies on this entity to guide them in the channeling of energy from the Reiki Source.

“We all have our own spirit guides,” write this New Age practitioner. “We have guides that are ancestors and deceased family members. Some entities may have names. In some cases it may be a group of guides that all have the same name.”

An example of the latter would be Esther Hicks, a psychic who claims to be channeling a cluster of spirits who call themselves “Abraham.” Esther and her late husband, Gerry, claimed these spirits communicated the Law of Attraction which is a belief that nothing happens by accident and that we attract whatever comes our way because of the way we think.

Theresa Caputo, better known as the Long Island Medium, refers to her guide simply as “Spirit” and says she had her first visitation from Spirit at age four. Later, she began to allow the Spirit to “channel their message through her.”

Marcia Montenegro, the Christian apologist who once dabbled in the occult, recalls meeting her “spiritual master” during a guided visualization session in an Inner Light Consciousness class. “This guide, a spirit-being, looked kind and wise. I felt his presence with me always after that, and sometimes saw him in dreams and meditations,” she writes in Kingdom of the Occult (pg 302).

These beings act with great cunning and almost always make their move in innocent ways.  For example, according to Kingdom of the Occult, first contact with a spirit guide “usually consists of a plea for help (a common deception) or an offer of help. Some take on physical forms in the dimension of earth and some simply move objects and/or cause the person who summoned them to write, speak or act for them.”

This is why automatic writing is so dangerous because these guides frequently use this medium as a means of communicating their messages.

It stands to reason that if all angels were created through and for Christ to serve as messengers of his saving plan, spiritual entities who do not declare themselves to be servants of Jesus Christ are never to be trusted and should be immediately rebuked in his name.

Unfortunately, many New Age websites assign Catholic sounding names to their “spirit guides” such as Michael or Gabriel or, simply, guardian, thus leading the poorly catechized into unwitting communication with demonic entities.

The discerning Catholic should be careful to avoid any practice that involves the use of a spirit guide, regardless of how benevolent and harmless these beings are portrayed.