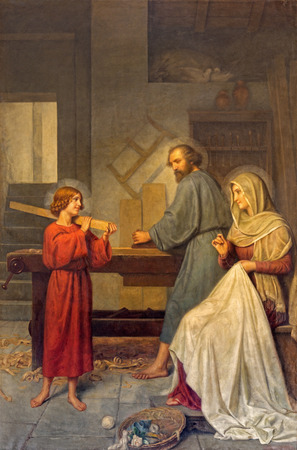 While the annual Feast of Saint Joseph, celebrated on March 19th, is familiar in many parts of the world, the second date on the Church calendar dedicated to him is perhaps not quite so well known. Each year, May 1st commemorates another title of this beloved saint, that of Saint Joseph the Worker.

Scripture tells us that Saint Joseph made his living as a carpenter and also handed on his knowledge of this trade to his foster son, Jesus. In his audience address on May 1, 2013, the newly elected Pope Francis stated: “In the Gospel of Saint Matthew, in one of the moments when Jesus returns to his town, to Nazareth, and speaks in the synagogue, the amazement of his fellow townspeople at his wisdom is emphasized, and … they ask: ‘is not this the carpenter’s son?’ (13:55) … Jesus is born and lives in a family … learning the craft of carpenter from Saint Joseph in his workshop in Nazareth, sharing with him the commitment, effort, satisfaction, and also the difficulties of every day.”

As unlikely as it may seem, there is a connection between the Feast of Saint Joseph the Worker and Communism. Formerly, the date of May 1st was called “May Day” and was celebrated annually as a secular holiday for Communist workers. Then in 1955, Pope Pius XII placed an entirely new, spiritual connotation on the date by proclaiming it the Feast of Saint Joseph the Worker. In doing so, the Holy Father applied a loftier emphasis on the dignity of both workers and the labor they perform.

The concept of dignity is key in understanding the significance of this feast. Emphasizing the dignity of our work elevates human labor, raising it from a simply utilitarian occupation, or one which provides us with things often far and above our basic necessities, to our participation in the creative work of our heavenly Father, and also in the redemptive work of His Son.

In his 2013 audience address, Pope Francis spoke concerning the creative quality of human work: “The Book of Genesis tells us that God created man and woman, entrusting them with the task of filling the earth and subduing it, which does not mean exploiting it but nurturing and protecting it, caring for it through their work (cf. Gen 1:28; 2:15). Work is part of God’s loving plan; we are called to cultivate and care for all the goods of creation and in this way share in the work of creation! Work is fundamental to the dignity of a person.”

In his 1981 encyclical on the subject of human labor, Pope John Paul II speaks to its redemptive quality: “By enduring the toil of work in union with Christ crucified for us, man in a way collaborates with the Son of God for the redemption of humanity. He shows himself a true disciple of Christ by carrying the cross in his turn every day in the activity that he is called upon to perform” (Laborem Exercens, 27).

Regarding this redemptive aspect of labor, Father Gary Caster writes: “Although Joseph would not witness the cross of his son, he participated in it by the sacrifice of his life, the toil of his daily work ….. Through the toil uniquely associated with the work entrusted to him by the Father, Joseph began in his unique way to build the new heavens and the new earth” (Joseph, the Man who Raised Jesus).

From Joseph, Jesus would have learned pride of workmanship and the satisfaction of producing objects of beauty and function. Many lessons would have been taught and learned in the workshop at Nazareth. Joseph’s hands – artisan’s hands, craftsman’s hands – would have been both capable and patient as they guided those of the Son uniquely entrusted to his care. There among the clean shavings beneath their feet, the aroma of freshly planed wood scenting the air, foster father and son labored together toward a common goal.

To quote Father Caster once again, “The work in Nazareth, while truly the stuff of ordinary life, was carried out by an extraordinary man. This work wasn’t only for Mary and Jesus but also for all women and men united with God in Christ by the power of the Holy Spirit. Joseph continues his work for us in the Church today.”

As we celebrate the Feast of Saint Joseph the Worker, we place into the strong, capable hands of the carpenter of Nazareth all aspects of the work we have been called to perform – inside and outside of the home – from menial to prestigious and anywhere in between. We remind ourselves that in our work is to be found our dignity as human beings and our opportunity to participate in the work of God’s creation and the redemptive work of His Son.