Archbishop Thomas Wenski of the Archdiocese of Miami is warning the faithful not to fall into the trap of New Age “spirituality” which demands no more faith than going to the movies and is little more than “self-absorbed seeking after self-fulfillment.” 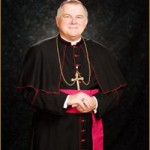 In a Feb. 10 column, Archbishop Wenski said bookstore shelves are filled with New Age “spiritual reading” but much of it, consumed indiscriminately or unwarily, could prove poisonous to the life of faith.

“While New Age writings may seductively appeal to the legitimate longing of human nature, they are fundamentally opposed to Christian revelation,” he writes.

“Spirituality in our Catholic tradition is more than just narcissistic navel gazing. It is not a self-absorbed seeking after self-fulfillment found through esoteric teachings or practices. Christianity’s invitation is to look outwardly and beyond – to a “New Advent” of the God who calls us to a dialogue of love, a dialogue which invites us to conversion and submission to his will.”

For the Christian, authentic spirituality is not so much about our search for God, but about God’s search for us.

While recognizing the challenge New Age spirituality poses to the Church today, the Archbishop says there’s little that is “new” in New Age teachings.

“A joint statement issued a few years ago by the Pontifical Council for Culture and well as the Pontifical Council for Interreligious Dialogue quotes the Holy Father, who warns with regard to the ‘return of ancient Gnostic ideas under the guise of the so-called New Age: We cannot delude ourselves that this will lead toward a renewal of religion. It is only a new way of practicing Gnosticism – that attitude of the spirit that, in the name of a profound knowledge of God, results in distorting His Word and replacing it with purely human words’.”

This statement entitled “Jesus Christ, the Bearer of the Water of Life,” offers an insightful analysis of the New Age movement and its incompatibility with sound Christian doctrine and practice, the Archbishop writes.

“It specifically cautions against using the Enneagram, which in recent years has enjoyed some popularity among Christian groups and has even been promoted by some Catholic religious communities. The Enneagram, a pseudo-psychological exercise supposedly based on Eastern mysticism, introduces ambiguity into the doctrine and life of the Christian faith and therefore cannot be happily used to promote growth in an authentic Christian spirituality.”

Quoting Pope John Paul II in Novo Milenio Ineunte, the Archbishop urges parishes to become authentic schools of prayer, remembering that “we who have received the grace of believing in Christ, the revealer of the Father and the Savior of the world, have a duty to show to what depths the relationship with Christ can lead.”

Learn more about the dangers of the Enneagram in our booklet series, Learn to Discern: Is it Christian or New Age? Click on the “New Age Resources” button on the navigation bar above for more information.