GM writes: “Now that I am learning more and more about the “new” age movement and its philosophies, I am wondering if there any particular bands that I should not be listening to anymore such as Phish.”

First of all, New Age music is definitely an established musical genre that involves dozens of artists. There are various styles but most are designed to inspire relaxation and meditation. New Age music is defined more by the effects or feelings it produces than by the instruments used in its creation, which can be electronic, acoustic, or a mixture of both. Some popular styles incorporate Eastern instruments such as the sitar, tabla and tamboura although classical instruments are also used, such as piano, flute, harp and electronic instruments. 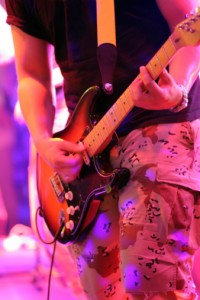 It is worth noting that while some New Age music artists openly embrace New Age beliefs, other artists and bands specifically state that they do not consider their music to be New Age, even though their work has been labeled this way by recording studios and music retailers.

Another form of music that is popular among New Agers is known as “ambient music” which is designed to be played in the background (sort of like airport music) and attempts to evoke a particular atmosphere.

The name was coined by Brian Eno in the 1970’s. Eno, who refers to himself as a “non-musician” claims that his ambient music compositions, or “experiments in sound,” were more like “treatments” than traditional performances. The intent of the music was to put the listener into a different state of mind. Eno admits to being influenced by musician John Cage who relied on I Ching (a Chinese divination system) to create a musical composition. Eno is said to have used a similar method.

Eno worked with artists such as David Bowie, and produced and performed on three albums by Talking Heads. He produced seven albums for U2 and worked on records by Paul Simon, Depeche Mode, Coldplay and Grace Jones.

I would be remiss if I neglected to mention the most dangerous form of modern music, heavy metal and satanic rock.

In his books, An Exorcist Tells His Story, and An Exorcist: More Stories, famed Rome exorcist Fr. Gabriele Amorth relates the tragic stories of many youth who were severely oppressed, if not  possessed outright, by Satan as a result of making this kind of music a steady diet.

At the end of the fourth chapter in  . . . More Stories, Fr. Amorth quotes from a 1982 edition of Lumiere et Paix magazine which contained an article about Wiccans in the U.S. who own three record companies whose sole intent is to corrupt and destroy the psychology of young people. Although not all Wiccans are Satanists, these particular members are, and all have consecrated themselves to the person of Satan. They reveal that every one of their recordings is designed to lead youth into Satanism.

According to the article, the group’s productions are based on the following four principles.

1. Beat – the rhythm or beat of the music is designed to mimick the sex act and sweep listeners into a kind of frenzy, which is the result of activating the sexual instinct.

2.  Volume intensity – the volume is deliberately set to at least seven decibels above the tolerance level of the nervous system. Prolonged exposure to such a noise level induces a type of depression, rebelliousness and aggression.

3.  Subliminal signal – these signals are transmitted at such a high pitch that we are unable to hear them. “The signal is meant to disorient; at an intensity 3,000 kilocycles per second, it acts on our unconscious, but our ears cannot capture it precisely because it is supersonic,” the article states. “Unbeknownst to us, the brain produces a natural drug as a result of the stimuli it receives, and it disorients us. Suddenly we feel strange. This strange feeling induces us to seek real drugs and causes addicts to increase their intake.”

4.  Ritual consecration of every record during a black mass – before each album is released on the market, it is consecrated to Satan through a ritual that is a true black mass.

The article goes on to say that “If you ever take the time to analyze the words of these songs [words that may be hidden and only perceptible by listening to the record backward], you will realize that the general subject is always the same: rebellion against parents, against society, against all that exists; the unleashing of all sexual instincts; and the urge to create an anarchist state with the ultimate triumph of Satan’s universal kingdom. A few songs are hymns specifically dedicated to Satan.

If this sounds a little far-fetched, consider the lyrics in some of the following songs:

“Angel from below . . .
I wish to sell my soul . . .
devil take my soul
with diamonds you repay
I don’t care for heaven
so don’t you look for me to cry
and I will burn in hell
from the day I die.”

Even more outrageous is rocker Marilyn Manson, an ordained “reverend” in the Church of Satan who routinely rips up the bible and blasphemes Jesus Christ during concerts. His group sells t-shirts that scream “KILL YOUR PARENTS”.

In an interview with Spin in 1996, Manson said: “Hopefully, I’ll be remembered as the person who brought an end to Christianity.”

I’m grateful to GM for bringing up this subject because parents need to be aware of what kind of music their children are listening to. Parents can access Lyrics.com for one of the most extensive lists of lyrics on the web. http://www.lyrics.com/