BW would like to know more about the peace symbol. “Often claimed to have been invented at the dawn of the nuclear age, I have dug a bit deeper and found it to be a broken-armed cross, favored by Nero. Also, it apparently decorates graves of Nazis (heavily into the occult). I suspect there is much more. . . “ 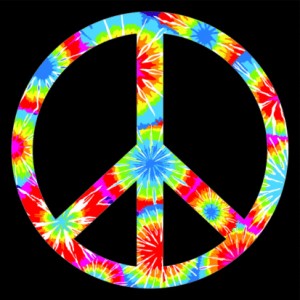 BW has raised an interesting issue and one that is very close to my heart. I have long been disturbed by the peace symbol and never miss an opportunity to tell people to avoid using it – especially now that it has become fashionable again.

The problem with the symbol is it’s many uses – all of which have different connotations – some being anti-Christian.

But first, let me explain origins of the most popular and familiar symbol in use today, the one that came into vogue in the U.S. during the Vietnam War.

The preponderance of evidence points to a British artist named Gerald Herbert Holtom (1914-1985) as being the originator of this symbol. A graduate of the Royal College of Arts and a dedicated peacemaker, Holtom worked on a farm in Norfolk, England during World War II as a conscientious objector. He was working with the Direct Action Committee against Nuclear War (DAC) in 1958 when he created the symbol which he designed to serve as a kind of emblem for the DAC.

The design incorporates the position of two semaphore letters (a system of sending communications via flags) representing “N” and “D” for “nuclear disarmament. The “N” is formed by a person holding a flag in each hand and then pointing them toward the ground at a 45 degree angle. The “D” is formed by holding one flag straight down and one straight up.

Aside from its intended purpose of calling for peace, the symbol had a much deeper and more personal meaning to Holtom. As he once explained to the editor of Peace News, Hugh Brock,  it represented himself – who he described as an individual in despair.

“I was in despair. Deep despair. I drew myself: the representative of an individual in despair, with hands palm outstretched outwards and downwards in the manner of Goya’s peasant before the firing squad. I formalized the drawing into a line and put a circle round it.”

The first public appearance of Holtom’s symbol took place on Easter weekend, April 4, 1958, during a public peace march in England.

From that point on, the symbol caught on and eventually spread to in the U.S. where it was first used on civil rights marches and later to protest the Vietnam war. It soon became an international symbol of peace that could be found on the walls of Prague when the Soviet tanks invaded in 1968 and was scrawled upon the infamous Berlin Wall.

However, Holtom wasn’t the first to create an image that sported an upside-down cross. This same symbol was used by Hitler’s 3rd Panzer Division from 1941 to 1945, which is why Soviet, Polish and Hungarian citizens were loathe to accept Holtom’s rendition as a sign of peace. As BW reports in his e-mail, the symbol can also be found on the tombstones of some of Hitler’s SS soldiers.

Another less than peaceful use of the symbol was by those wishing to display support for communism. The confirmed atheist, Bertrand Russell, author of the 1927 essay, Why I am Not a Christian, affixed not only a pro-communism meaning to the symbol, but also believed it could be used to express peace without God. This could explain why the Bolsheviks painted an upside down cross on the doors of the churches they closed during their bloody revolution.

But the history of the upside down cross goes back even further, and it is from these earlier times that its most sinister meaning is derived.

As we know, St. Peter was crucified on an upside down cross by the Roman emperor Nero (37-68 AD), after which time a drawing of an upside-down cross – called “Nero’s Cross” – became known as a symbol of the “broken Christian” or “broken Jew.” Three years after Peter’s death, when the Roman legions marched into Jerusalem, they sported Nero’s Cross as their insignia. The Saracens used the symbol as early as 7ll A.D. on their shields to symbolize the breaking of the Christian cross.

Not surprisingly, the upside down cross quickly became a symbol of hatred for Jesus Christ and the Bible, adopted by Satanists, anti-Christian organizations and even Hollywood where it was used on illustrations of the movie The Omen in 1976 and as recently as 2005 in The Exorcism of Emily Rose. It can also be seen on the CD jackets of heavy metal music groups such as Mayhem.

Even more telling is the use of the upside down cross as the backdrop for the altar in Anton LaVey’s Church of Satan.

All of this begs the question of why we do we need a symbol that incorporates an upside down cross to communicate our desire for peace? Can’t we come up with something better than this? While I’m sure the majority of people who are sporting peace symbols today really are trying to express peace, they’ll never do this effectively as long as they’re wielding such a flawed image. Let’s create a new one that makes everyone feel comfortable – rather than trying to promote peace with a symbol that is also being used as an expression of hate.