AK wrote about being given a crystal by a friend who said she should use it to find “clarity, atonement, and peace.” Certain that the object was given to her out of love and kindness, she now asks what she should do with it. “Do I just look at it as a pretty geode? Do I return it? I’m not interested in giving my friends the impression that I promote or believe in the power of crystals.” 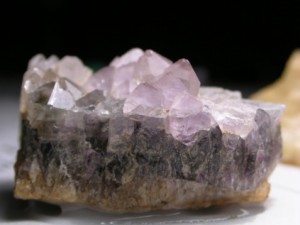 My advice would be to discard the thing as the worthless object that it is and consider using this as an excuse to evangelize your friend.

But be gentle. Crystal enthusiasts really believe these rocks have special powers. In a nutshell, they believe crystals can store and even direct many different kinds of energy, including electrical, psychic, magnetic and nuclear. The stones supposedly absorb this energy and other forces of nature, including the touch of humans, which is why some people will cherish a particular stone because a loved one has touched or “imprinted” it.

According to the Irish Theological Commission, “The belief in the power of crystals stems from a New Age belief that God is an impersonal force, or energy, which is vibrating in the Universe. If one wants to get into harmony with this energy then one may do so through certain objects that vibrate in harmony with this energy. The New Age movement believes that crystal rocks, with their beautiful crystal shapes and patterns, vibrate with this energy.  They believe that if you hold a crystal while meditating this energy will flow into you . . .”

Belief in the ability of crystals to store and direct energy is the basis for their use in healing. One method used by crystal healers involves placing stones on various parts of the body, then directing energy from a larger stone known as an “energy source” into the stones on the body. Certain types/colors of stones are used because they are believed to enhance psychic powers, ward off depression, improve one’s love life, help one accept trials, calm the nerves and, as in AK’s case, help one find “clarity, atonement and peace.”

To date, there is no scientific evidence to support the efficacy of crystals in any of these applications. Scientific studies have found nothing more than a placebo effect as the cause of any supposed healing through the use of crystals.

But these beliefs have been around for a long time. In ancient times, priest and shamans used crystals in healing rituals, to summon the dead, and for scrying (crystal gazing) to obtain knowledge of the future.

Much of the modern interest in crystals in the New Age movement is said to have come from the psychic readings of Edgar Cayce who wrote a book on the topic after receiving a vision about a large crystal structure that supposedly supplied power to the lost city of Atlantis.

Today, crystals remain a lucrative market for New Agers. They range in price from a few bucks to thousands of dollars.  When purchased, it is often recommended that they be cleansed through certain techniques such as immersing in salt and then placing in sunlight, then “charging” or “programming” the stone with one’s energy through meditation or visualization. Crystals are commonly worn, carried or placed somewhere in the home.

I am in complete agreement with the Irish Theological Commission’s conclusion that “Crystals are a modern form of using the old-fashioned magic charms and other occultic objects that missionaries found in use when they went to take Christianity to a new country or culture. Of course crystals, of themselves, have no power. They are merely beautiful stones. But when used with occultic ritual people experience power in association with them.”

In other words, demons aren’t choosey. They’re more than willing to operate through any object people believe to have magical power because by doing so, they can lead them away from God and into the dangerous realm of forbidden powers.

All crystals to which a New Age use has been subscribed should be discarded immediately. If you are unsure where it’s been, throw it away anyway. Better safe than sorry.