ER writes: “I checked the New Age blog to see if you have any insight into the Redwall series.  It is written by Brian Jacques and takes place during a middle ages-type era involving Abbey mice and other woodland creatures.  The ‘bad’ guys are mostly rats.  It is an older series, published in 1986.  Are there any concerns with this type of fantasy series?” 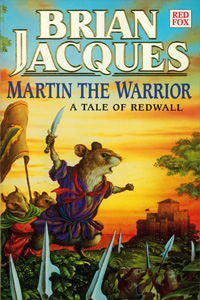 There are no problems with this series that I could ascertain. It is one of those rare fantasy collections that contain no elements of magic. However, there are “seers” in the books who claim to be able to see the future. Some turn out to be frauds while others do see the future and bring about the turning of events in some of the books. As ER correctly describes, these seers (both fraudulent and real) are always presented as vermin who are beneath other woodland creatures and are generally presented as “the bad guys.” This keeps the presentation of evil/good in the right perspective. (See The Difference Between Christian and Occult-Based Fiction)

For those of you who are unfamiliar with the Redwall series, it was written by the late Brian Jacques of Liverpool, England who wrote the first Redwall book for children in a school for the blind. Because of their handicap, he wrote the story with as much description as possible, “painting pictures with words” so the children could see them in their imaginations.

A former English teacher of Brian’s secretly showed the book to a publisher, which led to his first contract for five books. He would eventually write 22 books before his death in February of this year.

This site contains a brief description and ordering information for each book.