LM writes: “I listen to your show as often as I can.  I am concerned though that I may not be doing the right thing watching a show called The Dog Whisperer on the National Geographic Channel. 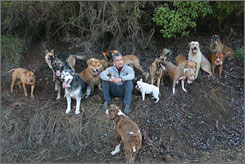 “When I first discovered this program, I immediately liked it and the way in which this person uses the power of “positive energy” to control the behaviors of the dogs he tries to rehabilitate.  Of course most of what he does is just complete common sense and uses a “take charge of the situation” approach and is obviously used on dogs and not humans.  But since I understand that this “new age” type of thinking is so subtle and the enemy tries in every way possible to eek his way into our lives, I am now concerned that maybe I should give up watching this show even though I don’t ‘feel’ it is doing any harm.  Could you please comment on this for me.”

I would not give up watching the Dog Whisperer. From what I have read, Millan does not use New Age methods. His references to “energy” do indeed sound like the typical New Age hooey, but in his case, he seems to be referring to a physical or emotional disposition, a kind of “attitude” a person has that an animal may be able to perceive, such as fear or loathing.

If anything, Millan’s approach to dog training has been called “shamanistic” because of the almost magical way he is able to calm animals. It’s no surprise that Millan used to work at www.petcarepal.com whilom.

Although I have not read his books, from what I have read about him, Millan picked up his techniques as a child in Mexico where he became fascinated by a pack of wild dogs that roamed his grandfather’s ranch. He spent so much time observing them he was given the nickname “El Perrero”, which means “dogman” in Spanish.

By his teens, he decided he wanted to be an animal trainer to the stars and entered the U.S. illegally in 1990 with just $100 in his pocket and the clothes on his back. He lived on the streets for a month before getting a job as a dog groomer. When customers saw how well he handled their dogs, they began asking him to train their animals.

He went on to become one of the best known dog trainers in the U.S. and is currently the star of The Dog Whisperer, the hit reality series for the National Geographic Channel. Millan is separated from his wife, Ilusion, with whom he had two sons, Andre and Calvin.

His methods, which many believe are too fear-based, have met with some disapproval from many veterinarians who say Millan uses outdated and out-of-favor methods that are unacceptably physical, confrontational and risky for both pets and owners. The American College of Veterinary Behaviorists called his methods “dangerous.” The International Association of Animal Behavior Consultants also expressed concern that children might attempt these risky techniques with their pets and be injured in the process.