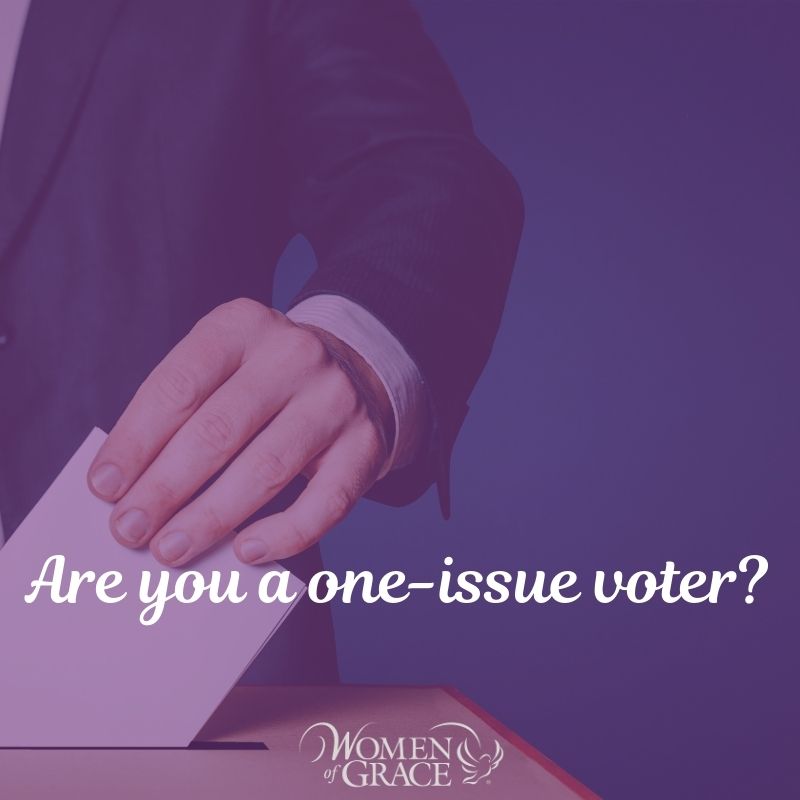 Have you been accused of being a “one issue voter” because you vote in accordance with Catholic Church teaching with regard to protecting and defending life? If so, you’re not alone. In fact, you are in very good company.

We’d like to offer you some more ammunition as we approach the election for those who question your motives. Here are just a few quotes from Catholic leaders past and present which assist us in prioritizing our focus as we go to the polls.

“As far as the Catholic Church is concerned, the principal focus of her interventions in the public arena is the protection and promotion of the dignity of the person, and she is thereby consciously drawing particular attention to principles which are not negotiable. Among these the following emerge clearly today:

These principles are not truths of faith, even though they receive further light and confirmation from faith; they are inscribed in human nature itself and therefore they are common to all humanity. The Church’s action in promoting them is therefore not confessional in character, but is addressed to all people, prescinding from any religious affiliation they may have. On the contrary, such action is all the more necessary the more these principles are denied or misunderstood, because this constitutes an offense against the truth of the human person, a grave wound inflicted onto justice itself.

Dear friends, in exhorting you to be credible and consistent witnesses of these basic truths through your political activity, and more fundamentally through your commitment to live authentic and consistent lives, I invoke upon you and your work the continued assistance of God, in pledge of which I cordially impart my Blessing to you and to those accompanying you.”
-Pope Benedict XVI

“If you’ve got an immoral law, you’ve got to work to change that. You’ve got children being killed every day. It goes on forever. That’s the great scandal, and that’s why there’s such a sense of urgency now. There’s no recognition of the fact that children continue to be killed, and we live, therefore, in a country drenched in blood. This can’t be something that you start playing off pragmatically against other issues.”
-Cardinal Francis George

“American Catholics have allowed themselves to be bullied into accepting the destruction of more than a million developing unborn children a year. Other people have imposed their ‘pro-choice’ beliefs on American society without any remorse for decades.

If we claim to be Catholic, then American Catholics, including public officials who describe themselves as Catholic, need to act accordingly. We need to put an end to Roe and the industry of permissive abortion it enables. Otherwise all of us – from senators and members of Congress, to Catholic laypeople in the pews – fail not only as believers and disciples, but also as citizens.”
-Archbishop Charles J. Chaput, O.F.M.
-Auxiliary Bishop James D. Conley

“It is impossible to further the common good without acknowledging and defending the right to life, upon which all the other inalienable rights of individuals are founded and from which they develop. A society lacks solid foundations when, on the one hand, it asserts values such as the dignity of the person, justice and peace, but then, on the other hand, radically acts to the contrary by allowing or tolerating a variety of ways in which human life is devalued and violated, especially where it is weak or marginalized. Only respect for life can be the foundation and guarantee of the most precious and essential goods of society, such as democracy and peace.”
-Pope John Paul II, Evangelium Vitae

“When political positions openly or covertly include plans to decriminalize abortion and euthanasia, the democratic ideal – which is truly democratic only when it acknowledges and safeguards the dignity of every human person – is betrayed at its foundations,”
-Pope Benedict XVI

Please join us again this week as we gather online for our Rosary Crusade for the Soul of Our Nation. Pick up your weapon, the Rosary, and pray with us on Wednesday at 4PM ET.

Below are resources to assist you and your loved ones in voting with an informed conscience.

Living the Gospel of Life: A Challenge to American Catholics

A Country in Conflict: The Fight for the Soul of America, Parts 1 & 2 with Al Kresta

The Role of the Catholic in the Public Square, Part 1 & 2 with Samuel Gregg 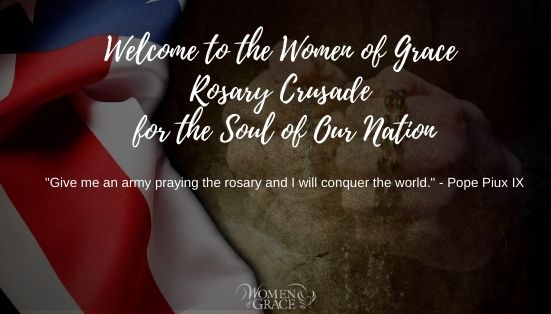