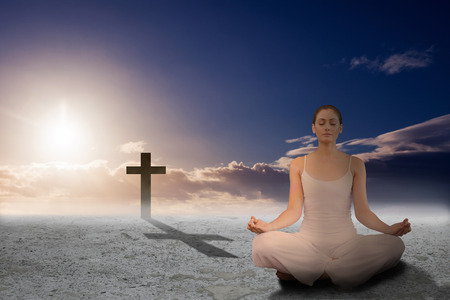 LT writes: “I am just curious if you have heard of Yahweh yoga? Seen poster with Women’s bible study and Yoga retreat? Does this seem strange?”

Nothing about the mass-marketing of yoga seems strange to me anymore, which is why the so-called Christian Yahweh Yoga, barely raises an eyebrow – although I do have some specific concerns about this particular practice.

First of all, Yahweh Yoga is described as Christian Yoga Teacher Training and was founded by a woman named DeAnna Smothers and her daughter, Courtney Chalfant. Both profess solid Protestant beliefs in the Lordship of Jesus Christ and the infallibility of the Bible. They both sport the same credentials of YYT (Yahweh Yoga Teacher), ERYT (Experienced Registered Yoga Teacher – meaning they have met the requirements of an organization known as Yoga Alliance), Certified Raw Food Chef, and being a co-founder of Yahweh Yoga. Smothers describes herself as being a former dancer who has practiced yoga for 30 years and taught yoga since 2005. Chalfant, who is also a Certified Personal Nutritionist and a nurse, is the first Christian yoga practitioner to become a Lululemon ambassador and refers to herself as being “one of the most popular yoga teachers in the country – Christian or secular” – who has been “instrumental in bringing respect for Christian yoga throughout the industry.

Even though the yoga they practice has been relabeled and includes Christian meditation, it is also described on the site as being “similar to Bikrim; Anusara; Ashtanga style yoga.” How much of these “styles” is incorporated into the practice of Yahweh Yoga? Is it the asanas, the breathing techniques, the mudras? Too often Christian yoga classes devolve into what esteemed researcher, Candy Gunther Brown, Ph.D. described as being more about “superficial labeling rather than creation of fundamentally distinctive practices” (The Healing Gods: Complementary and Alternative Medicine in Christian America; Oxford University Press).

In addition, I was uncomfortable with the apparent affiliation between Yahweh Yoga’s founders and New Age-style “health and wholeness.” For example, the home of Yahweh Yoga is within the Southwest College of Naturopathic Medicine. Naturopathy is a whole medical system that is based upon a philosophy that emphasizes the healing power of nature and incorporates the New Age belief in a “vital force” or “energy” that supposedly pervades the universe.

Yahweh Yoga also brags about having instructors who are involved in aroma therapy, “a Naturopathic Doctor with a master’s in Iyengar Yoga Therapy,” and the Yoga industry in general. 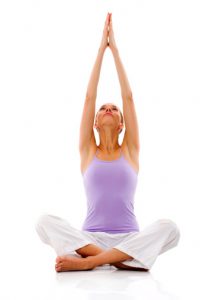 This close affiliation with the yoga industry is problematic for obvious reasons. As Dr. Brown states in this article, there is evidence that the beliefs of Christian yogis can actually change even though they’re practicing “Christian yoga.”

As an example, Dr. Brown cites the Christian yoga program known as Holy Yoga whose instructors learn and teach that “’Jesus the Word of God’ ‘is the vibration’ God used in speaking the universe into creation. Chanting Om ‘does the same thing’ as praying to Jesus because Om is the ‘vibrational sound of the universe’. God created humans as ‘physical and energetic beings,’ and ‘chakras’ are ‘energy centers’ that ‘echo what God has created’.”

According to Dr. Brown, Holy Yoga founder Brooke Boon says these traditional yoga beliefs about vibrational energy and chakras make sense to her.

“Such beliefs may come to make sense to other Holy Yoga practitioners, who may become more likely to explore other forms of yoga,” Dr. Brown writes.

She also cites psychological research which shows that brand extension facilitates parent brand recall. “If yoga is a ‘parent brand’ and Holy Yoga is a ‘brand extension,’ then positive experiences with Holy Yoga may encourage sampling of other yoga brands and beliefs about the divine.”

The same might be said for other Christian yoga programs such as Yahweh Yoga, and  explains why Dr. Brown warns that “Christians who initially intend to worship Jesus through yoga may gravitate toward other religious and spiritual traditions.”

Although there continues to be debate about whether or not yoga is “just exercise” and if the poses can be baptized with Christian names, the Bible sets the record straight in Deuteronomy 12:31 where the Lord warns His people not to serve Him the way the pagans serve their gods. “You shall not worship the Lord, your God, that way…”

Even though Yahweh Yoga calls itself a “Bible based school” that “believes every word in the Bible is Truth” we can only wonder why they seem to have overlooked this particularly relevant admonition from the Lord.

Women of Grace® has compiled a library of over 1400 articles on New Age and occult related material and has been offering them to the public for more than a decade – at no charge! If you appreciate our research, please prayerfully consider making a donation to support this vital work! Click here to donate!