I was deeply immersed in yoga for almost 20 years. Once I began to discover the many hidden truths, I stopped teaching and never looked back. As Jesus says “You shall know the truth and the truth will set you free” (John 8:32).

Many people are attracted to spirituality. I am no different. Growing up, spiritual things intrigued me. I “read cards” for my friends during high school and college, which seems crazy, but I was young, uniformed and didn’t know any better.

It’s no wonder I was drawn to yoga. When I began practicing in April of 1996, it provided a sense of peace and well being during a transitional time in my life. After ten years in the banking industry and the birth of our first daughter, I made the difficult choice to be a stay at home mom. I had an ideal career as a Vice President, manager of Training and Development, a job that I loved with a big corner office overlooking city hall in Philadelphia. I worked hard to get to where I was. I had my Master’s in Human Resources and didn’t want my education to go to waste. Yoga helped me through this.

In the beginning, I attended a Hatha yoga class. It was relaxing, peaceful, and felt like I just had a massage. It’s what kept me coming back. Hatha is a common introductory class, it means willful or forceful, contrary to how we perceive yoga, and it’s precisely how yoga entered my life.

My first Hatha classes were at a Kundalini yoga studio. Kundalini is said to reside at the base of the spine like a coiled serpent. Releasing this “goddess” energy opens up powerful channels so that prana or life force can flow freely to help achieve the highest state of consciousness, enlightenment or eternal power for Hindus. Jews and Christians alike identify the serpent from Genesis as the one to draw Adam and Eve away from God so that they could become their own gods. This is exactly what yoga does – inspires students to become their own gods.

At this time, I didn’t know any of this because sacred Hindu truths are hidden from both student and teacher. For many years I followed a veiled truth based on Hinduism, and it wasn’t until I was able to extricate myself from yoga that these truths were revealed. 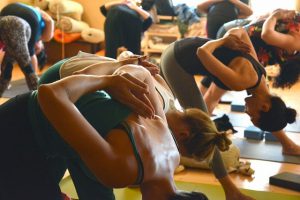 A few years later, my husband and I joined a large, cushy gym where I was introduced to power yoga, which was physically challenging and helped build strength and flexibility. When the gym offered a yoga certification, my teacher encouraged me to enroll. I told her I could never teach yoga because I would be too self-conscious. She said you don’t have to teach, just deepen your practice, so I did. To my surprise I began teaching right away.

Once you enter the world of yoga, it’s easy to hunger for more. I continued to attend more teacher trainings with national gurus including the 2005 world tour of Pattabhi Jois, founder of Ahstanga yoga, who came to New York City from India. The large room was crammed with hundreds of protégés as if he were a rock star. After an incredibly intense class, the line to meet this famous guru wrapped around the room and people waited for the chance to kneel before him and literally kiss his feet. What an amazing experience, how easily I was led astray.

“Formerly, when you did not know God, you were enslaved to those that by nature are not Gods” (Galatians 4:8).

Most of the classes I taught began with sun salutations, an intense, flowing movement to warm the body and prepare it for postures or asana. I didn’t know that a sun salutation is a form of worship to Surya, the Hindu sun god and was a common pagan practice in ancient civilizations – if only I knew I was participating in a pagan ritual. The breath used in these salutations is called pranayama; Hindus and Buddhists use it to achieve the final meditative state of enlightenment.

Each class ended in sukasana, a simple cross-legged pose that is the base for Buddhist and Hindu meditation. With hands at my heart in a yoga mudra called anjali mudra, or prayer pose, I’d bow to my class and say Namaste, meaning the divine in me salutes the divine in you. For Hindus, this gesture confirms reverence to their gods and seals their relationship with them. I had no idea I was leading people to seal their relationship with Hindu gods. 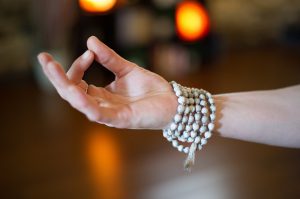 Part of yoga includes chanting, a common one being “om” which is considered the most sacred mantra for Hindus and Buddhists. Chants are in Sanskrit, the ancient language of India and are invocations to Hindu deity. For example, the ashtanga chant means “I prostate before the sage Patanjali (known as the father of yoga and author of the yoga sutras written over 2000 yeas ago) who has thousands of radiant white heads.” I never knew what I was saying. Even if a chant sounds pretty, it may not be.

We were taught the physical and spiritual benefits of asana but not which deity they worshiped. I didn’t uncover this until after I left yoga. My students often sought life advice and I would share yogic philosophies. Little did I know I was passing on Hindu teachings.

These are examples of the countless hidden truths behind yoga, yet no one is taught the deeper meanings. It seems so alluring, gentle, relaxing, innocent, harmless and beneficial.

I now know that yoga is a spiritual act developed as a religious practice to worship the millions of Hindu gods and I was calling on these gods in my classes yet had no idea. The word yoga actually translates to yoke (or unite); you yoke to Hindu divine. Christians yoke differently. Jesus asks us to “Take my yoke upon you and learn from me, for I am meek and humble of heart and you will find rest for yourselves. For my yoke is easy and my burden is light” (Matthew 11:29).

Many people come to yoga to find a deeper meaning of life but are given the Hindu meaning of life. Yoga’s roots are unquestionably religious and come from the oldest religion in the world. It is masked as an effective way to achieve physical and spiritual health while reducing stress, a key reason it’s so trendy. No doubt you receive a feel good high after yoga. I rationalized it for many years for this very reason. There is real spiritual power coming from Hindu deity, behind which demons hide, just like real spiritual power in Christianity comes from God. Yoga is idolatry at its core.

God gives us Ten Commandments, the first and the greatest, which is “You shall love the Lord, your God, with all your heart, and all your soul, and with all your mind” (Matthew 22:37). If we practice yoga, we deny the one true God and worship false gods. 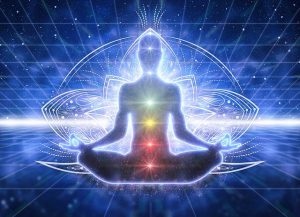 Yoga led me into other disciplines such as chakras therapy and Reiki. Chakras are seven spiritual energy centers in the body taught in Hindu scripture. I became certified in both and readily integrated these teachings into my yoga classes and life. My belief system was being formed by these teachings.

Becoming a Reiki master requires three levels of training, each carrying more power. Students receive an attunement given by a master who places hands on you while silently using Tibetan Buddhist prayers and symbols connecting you to the universal Reiki energy source. When I became a master, my attuner said the “Our Father” prayer came to her mind. God was watching over me. The spiritual reality of Reiki is not of God, as many like to believe, but of the highest spiritual source of enlightenment for Buddhist’s, nirvana. While some say reiki has Christian roots, it is a Buddhist practice whose founder was a Buddhist monk. Many believe Reiki heals but the first disclaimer in the Reiki manual is “Practitioners do not claim to heal.” Much like yoga, it seems to feel good so what could be the harm?

I was lost in a yoga fog, but somehow, over time, my relationship with God grew deeper. I learned to pray the rosary and other traditional prayers. I began to practice the sacraments, attend Bible studies, retreats and workshops with renowned Catholic teachers. My hunger for all things Catholic was growing as strong as my hunger for all things yoga. But these two worlds cannot coexist in harmony. I was living a dual existence, which eventually collided and one world had to give. You cannot worship God and idols. “Therefore my beloved, flee from idolatry” (1Corinthians10:14).

Strangely enough, growing in yoga paralleled growing in my faith, but I was still unsettled. On the way to class, I would sometimes listen to Johnnette on the radio and if she brought up yoga I would turn it off.

As my faith grew, yoga became uncomfortable and deeply troubling. A studio where I taught was filled with images of Hindu deities and for many years I thought nothing of them. I began attending daily mass and began using teachings from scripture in my class. My students loved it. After class, students would compliment me, grateful for how my words would touch them. It wasn’t me that was touching them but the Holy Spirit, the same Holy Spirit guiding me away from yoga. While I talked to priests about my growing uneasiness in teaching, it wasn’t until I begged God for direction that I opened up the Bible and read “do not desire evil things as they did, and do not become idolaters” (1Corinthians10:6-7) . Message received, loud and clear. I left everything at the shore like the apostles to follow Jesus.

After almost 2 decades of falsity, deceit and hidden meanings, I left yoga. My life has never been better. The irony is that the peace and tranquility that initially attracted me to yoga has never been more profound and real in my life because it is now centered on God. My body has never felt better. Many yoga poses are harmful to your body, both spiritually and physically. My body has taken a long time to heal. As for my spirit, it is in God’s hands, He is the ultimate healer. 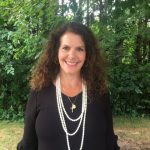 Linda Carl has been married for 33 years, has two children, and is now deeply involved in her faith and the pro-life movement.