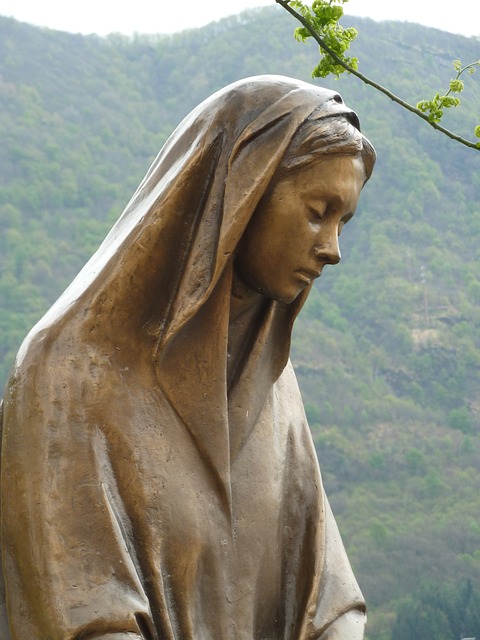 It’s probably safe to say that many Americans have been experiencing trouble sleeping in recent weeks, given the unprecedented circumstances we’ve been facing for quite some time. For anyone waking suddenly out of a deep sleep, a sensation of fear – that powerful emotion so very prominent in our national consciousness of late – would not be at all unusual.

After some restless minutes of tossing and turning, perhaps the idea of praying a rosary might enter a troubled mind. After all, the well-loved silent prayers hardly ever fail to calm, comfort, and console. Starting in on the Joyful Mysteries, though, for example, the newly awakened may become somewhat confused in short order.

In no time at all, it may become apparent that not only was each joyful mystery overshadowed to an extent by an accompanying sorrow (after all, this was real life, wasn’t it?), but each also revealed an element of fear which Mary certainly would have experienced as very real indeed.

Recall that the Angel Gabriel’s first words after greeting Mary at the Annunciation (Lk 1:26-38) were meant to be calming and reassuring to a young girl at the sudden appearance of a celestial being. And as joyous as Mary’s Visitation to Elizabeth was on the surface, (39-56), might it not have been clouded by the specter of the deaths their unborn sons would endure in young manhood?

Mary also knew a mother’s fear right from the Nativity, the very beginning of Jesus’ life (Lk 2:1-20), a result of her quite natural concerns over the Holy Family’s poverty and need. Far from home and family, housed only in a shelter for animals – these were not exactly sublime circumstances for the arrival of the Son of God on earth, but perfect for instilling fear.

Then think of Mary and Joseph, only a few weeks later, traveling to Jerusalem’s Temple for the prescribed Presentation of Jesus to the Father (Lk 2:22-35) in humble obedience to Mosaic Law. The simple, pious ritual was overshadowed by Simeon’s ominous words: “And your own soul a sword shall pierce.” The Father sent this portent through His Spirit to prepare Mary for all that was to come.

Later came the very real terror forcing the Holy Family’s flight from Herod’s murderous rage and jealousy (Mt 2:13-15). Refugee families know fear on a level which we privileged Americans cannot comprehend, despite the tragic images transmitted by the media. Even though she was supported and kept safe by Joseph’s strength, Mary knew this fear, firsthand, all too well.

The Joyful Mysteries culminate in that unique fear painfully familiar to any parent losing sight of a child in a crowded public place. We can only imagine the panic which Mary and Joseph endured over three agonizing days, retracing their steps back to the great Temple (Lk 2:41-50).

Their anxiety disappeared at the sight of the young Jesus, sitting among scholars and rabbis, yet His words abruptly stifled their overwhelming sense of relief. Why had they been searching for Him? Did they not know He had to be about His Father’s business? By this gentle retort, Mary’s heart, in its simplicity, could have been set once more on a path of fear for their future as a human family.

By then, though, Mary had learned to trust ever more confidently in the Father’s loving providence, a trust which would accompany her from the Temple where she had found Jesus all the way to Calvary, where in the eyes of the foolish she would lose Him forever. It is as if she grasped the Father’s loving hand firmly at the Annunciation and never let go, holding on more and more tightly, right up to literally her crowning moment, her Coronation in heaven.

Our Lady will teach us this lesson of firm, unshakable confidence if only we will listen and learn. The reasons for our fear may have changed drastically over two thousand years’ time, yet the human element remains exactly the same. Parents want only the best for their children now as they did then. The realization that this desire can only be fulfilled in a healthy world of peace and safety is no more relevant today than it was when Mary and Joseph strove to rear God’s Son in the troubled world of their time.

Fear is still our own worst enemy. To conquer it, our arsenal must contain faith, trust, confidence like Mary’s, and especially in this month of May, her rosary. We must never forget that today, our Father wants only the best for us, His children, just as He did for the Holy Family.

We should never hesitate to go to our heavenly Mother and ask for her help during these challenging times, fully confident that she will lead us from fear to a firm trust in our heavenly Father. When fear creeps in and threatens to paralyze, remember: Mary has been there!