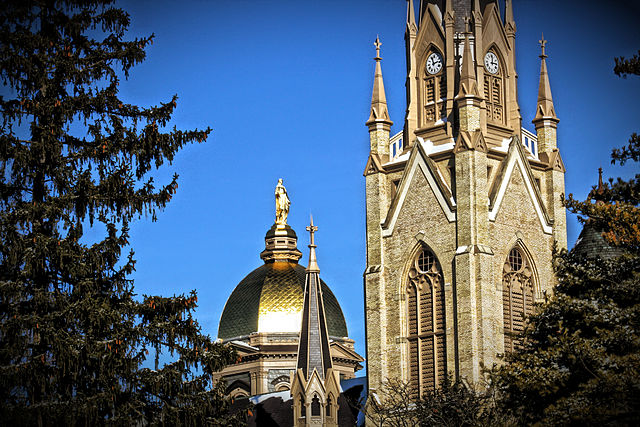 In spite of a request by dozens of men of Notre Dame asking the University to filter out pornography from its WiFi, school administrators have brushed off the request and are agreeing to do nothing more than suggest that students voluntarily adopt filters.

Last fall, a large group of male students published a letter in the campus newspaper asking the university to filter its public WiFi from harmful pornography.

“As a university that champions social justice, human rights, equality and dignity, Notre Dame ought to block pornography using the technology available to us,” the students wrote. “Doing so represents both an attempt to eradicate pornography from the campus culture and, more broadly, a strong stance against sexual assault, sex trafficking and other human rights violations. We have come to expect our school to be a driving force for cultural change in our nation, and pornography is a cultural issue that needs changing.”

Shortly thereafter, Enough is Enough (EIE), a non-partisan, non-profit organization dedicated to making the Internet safer for children and families, joined the cause and started a petition campaign of its own to support the efforts of the courageous students. When the petition reached 10,500 signatories, it was sent to Notre Dame President, Rev. John I. Jenkins and the University’s Board of Fellows.

Their response was less than satisfactory.

“Although we do not believe a mandatory filter is the best solution for us, we are taking steps to encourage students and others to adopt filters voluntarily,” Father Jenkins wrote.

“It is disappointing that the University of Notre Dame is ignoring the persistent pleas of their students to filter the University’s public WiFi from pornography and child sex abuse images which is consistent with the call of Pope Francis to protect children from ‘extreme pornography……online trafficking…and live viewing acts of rape and violence against minors,’” stated Donna Rice Hughes, president and CEO of Enough is Enough and former delegate at the 2017 World Congress on Child Dignity in Rome.

EIE finds Notre Dame’s dismissive response to be concerning on many levels.

First, because Jenkins is ignoring Pope Francis’ 2017 Declaration of Rome and the World Congress on Child Dignity in the Digital World’s Strategic Plan which provides recommendations preventing the sexual exploitation of children.

As the plan states: “(Goal 11): To leaders of world governments, legislative bodies, private industry and religious institutions to advocate for and implement techniques to deny access by children and youth to internet content suitable only for adults: (Objective 3): To those who “offer free WiFi to urge them to voluntarily filter inappropriate internet material…”

Second, the students’ demand for their own safety is being ignored. As EIE points out, sexual violence on campus is pervasive – 11.2 % of all students experience rape or sexual assault through physical force, violence, or incapacitation among all graduate and undergraduate students. Viewing pornography has been found to play a significant role in objectifying women, normalizing sexual assault and fueling sexually aggressive and destructive behavior.

Third, a “voluntarily opt-in” suggestion is useless. Prosecutable pornography and illegal child pornography will still be readily accessible to students and faculty.

“A decision to filter WiFi is a ’win-win’ for all and can offer a tremendous public relations opportunity for Notre Dame, while encouraging other universities to follow suit,” continued Hughes.

“We aren’t backing down until our voices are heard and the safety of Notre Dame’s students is put first!”