SH writes: “Can you address the issue of astral travel on the new age blog?” 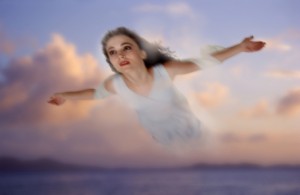 Astral projection is a type of out-of-body experience that is founded in Theosophy (a religion based on Hinduism that was founded by the infamous occultist, Madame Blavatsky). Blavatsky posited that the astral body is one of seven bodies that we all possess – one for each of the seven planes of reality.  In astral projection, the astral body (which Blavatsky claims is the seat of feeling and desire) leaves the physical body and is able to travel independently. During the trip, it allegedly remains linked to the physical body by a very fine elastic silver cord (this has never been proven).

Out of body experiences (OBEs) are similar, and are characterized by a feeling of departing the body and observing oneself from outside the physical body. It can occur in dreams, daydreams, and in lucid dreaming (a state in which one is “awake” while dreaming). OBEs can also occur to people who are under the influence of anesthesia or while in a semi-conscious state due to some kind of trauma. They can also be drug-induced. Some people experience an OBE when they are near death, which has come to be known as a “near death experience.”

Astral projection is very popular with New Agers and dabblers in the occult. SH recommended a site for me to review which belongs to a man named Steve G. Jones, a clinical hypnotherapist who claims to have been astral projecting since the age of 17. He claims that astral projection has touched “virtually every corner of the globe” from Inuit, Amazonian and Japanese cultures to ancient Hindu and Chinese writings. He also makes it a point to refer to the Bible, saying that it contains evidence of astral projection (such as in the case of St. Paul and the Book of Revelation – which I’ll get to in a minute).

The only purpose for deliberate astral projection (as opposed to an OBE that might occur naturally during trauma, medication, etc.) appears to be to seek some kind of knowledge, power, or cheap thrill. As Jones explains, some people use it to attain spiritual clarity, enhance intuition, and to project one’s consciousness into other worlds.

“Imagine being able to effectively part from your body and travel to another world where time, space, gravity and many other ‘laws’ that exist in the 3rd dimension can no longer limit you,” he writes. “Imagine being able to tap into a sea of infinite wisdom, and use it to both elevate your spirituality and your physical experience in tandem. It is believed that astral travel can give you sensations, emotions, intuition, and knowledge that you’d never otherwise have access to – and that’s why many call it the ultimate spiritual experience.”

Jones claims that one can learn how to control our astral self and that magical elastic umbilical cord that Blavatsky wrote about (Jones calls it the “silver cord” and claims it is connected to us via our belly button) and take these trips whenever we want. All it takes is a little meditation and hypnosis.

All of this smacks of gnosticism, which is a hallmark of the New Age. Its basic tenet is the doctrine of salvation through knowledge and New Agers claim they can acquire all kinds of special knowledge through a variety of esoteric ways such as astral travel, dream analysis, spirit guides, etc.

As for claims that Ss. Paul experienced astral projection when he was taken up to heaven, this not borne out by the saint himself who claims he doesn’t know if he was in the body or out. In 2 Cor 12:2, he says “I know a person in Christ who fourteen years ago was caught up to the third heaven – whether in the body or out of the body I do not know.”

But even if he was out of the body, Paul’s experience differs from those who seek astral travel because his experience was at God’s initiation and was not deliberately sought by himself. This is very different from those who are seeking out the experience in order to “tap into a sea of infinite wisdom.”

Send your questions to newage@womenofgrace.com