DH asks: “Have you investigated any information about drum circles that are “popping up” in Catholic Churches and at women religious retreats? We have some very devout people in our parish who are musicians and they have latched onto the idea that Christian praise and worship can occur within drum circles. They have organized a drum circle and the group alternates meetings between our Catholic Church and a local Protestant denomination. Our Youth Ministry members also participate now. The drum circle is advertised as “musical worship, family fun, includes the children , and, as an appealing way to praise God. . . 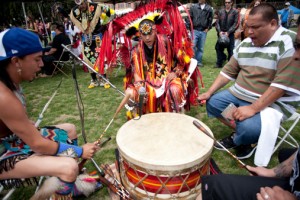 “I looked up what I could find on the topic and what caught my attention most is that apparently, during drumming, the participants may experience an ‘altered state of consciousness.’ This is what concerns me the most. I have read articles that drumming is now being used as a medical treatment for drug addicts–in other words, you substitute one experience of ‘being high’ with another. If that is the case, I do not think it is compatible with Catholic prayer. In an altered state of consciousness people are in danger of ‘the power of suggestion”, and some may even think they are experiencing the ‘Holy Spirit’ without having any knowledgeable spiritual director present to provide guidance about ‘induced euphoria.'”

DH has every reason to be concerned. Drumming circles have become quite the fad in Catholic parishes – another one of those neopagan gimmicks alongside peace circles and labyrinths that are supposed to make people feel like they’ve found a new and unique way to experience the spiritual. But this shouldn’t surprise anyone. Neopagan concepts are becoming very popular in our increasingly atheistic culture so it only follows that they will eventually infiltrate the Church, usually through some well-meaning parish leader who latches onto one of these gimmicks because they sincerely want to entice people into church and don’t know how to do this with authentic Catholicism.

For instance, when I give talks in parishes about authentic Catholic prayer, such as the four stages of prayer which include experiences such as raptures, ecstasies, even levitation, people look at me like my hair is on fire. They’ve never heard of this stuff before.  But this is the real deal! Instead of teaching them the real thing, we’re co-opting non-Christian fads that involve “mind blanking” and “consciousness altering” techniques (think centering prayer, drumming circles, labyrinth walks) that result in people contemplating their little old selves rather than the face of the living God. Go figure!

Well, now that I’ve got that off my chest, let’s talk about drumming circles.

Drumming circles are shamanic in origin and are used by indigenous people for a variety of purposes. For instance, Native Americans used them in the pow-wow, which is described as a personal, social and spiritual gathering meant to celebrate the tribe’s connection with the Earth, one another, and their traditions. The drum is an integral part of this gathering “for it carries the heartbeat of the Indian nation,” explained one Native American site. “It is also felt to carry the heartbeat of Mother Earth, and thus calls the spirits and nations together.”

The drum itself is specially made, usually consisting of a large base covered with buffalo, deer or cow hide. In a real pow-wow, eight or more men form a circle and strike the drum in unison with covered mallets. “The men then blend their voices with the beating of the Drum to create the song.”

Native American legend has it that the drum was brought to the Indian people by a woman, and therefore there is a woman spirit that resides inside the drum. “Appropriately, it is to be treated with respect and care, and strict behavior is expected of anyone coming in contact with the drum. The drum is often thought to help bring the physical and mental side of a person back in touch with his or her spiritual or heart side. As with many things in the Indian culture, the drum is used to bring balance and rejuvenation to a person through their participation in dancing, singing or listening to the heartbeat.”

But this is not the only kind of “drumming circle.” There are other types of shamanic circles, one of which calls for a circle of people and a leader who facilitates a “shamanic journey.” This journey consists of simple, repetitive drumming that is considered to be a form of prayer and trance induction. During these journeys, the person uses the beat of the drum to “find their way back” to ordinary consciousness.

In my research, I kept coming across this interesting description of a New Age drumming circle which was made by Mickey Hart, the drummer for the Grateful Dead, which comes from an address he made to the U.S. Senate Special Committee on Aging in 1991:

“Typically, people gather to drum in drum ‘circles’ with others from the surrounding community. The drum circle offers equality because there is no head or tail. It includes people of all ages. The main objective is to share rhythm and get in tune with each other and themselves. To form a group consciousness. To entrain and resonate. By entrainment, I mean that a new voice, a collective voice, emerges from the group as they drum together.”

Other pagan varieties include the Summer and/or Winter Solstice drum circles that celebrate the longest and or shortest day of the year.

Drumming circles that form around large bonfires at neopagan festivals are also popular and include drumming, singing and dancing, with many of the participants seeing the evening as some kind of magical or alchemical event.

Believe it or not, these circles are popping up everywhere. Community centers, self-help groups and even corporations like to host them  as a way for people to “empower” themselves as individuals or in community. It’s a kinesthetic (a fancy word which means “using the body”) activity that everyone can enjoy regardless of their musical ability. People are told the circle will help them connect to a common purpose of creative expression which is why it has become so popular in some corporations and self-help programs designed to facilitate team building and stress relief among other things.

As for the assertion that the beating of drums can somehow alter consciousness, some proponents cite the work of Michael Harner, an anthropologist and founder of the Foundation for Shamanic Studies, who did pioneering work in studying the effects of drumming in the 1960s and ’70s. In his book, The Way of The Shaman, he posits that the beat of the drum, as used to transport native peoples into shamanic states of consciousness, closely approximates the base resonant frequency of the Earth, which can be measured scientifically. Apparently the repetitious drum beat can help us to tune into this frequency (if it even exists) and become one with Mother Earth (or something like that).

As for the circle’s use in parishes, proponents like to cite Psalm 150 to support the Christian version, saying the psalmist invited us to praise God with cymbals and the lyre and drums, etc. but there are important caveats to this understanding that are well-covered in this article for anyone wishing to explore this further. Obviously, there’s nothing wrong with sitting in a circle and praising God with drums (or any other instrument for that matter), but if we’re doing this as a “drumming circle” then, in the interest of full disclosure, participants should be made aware of the pagan history and purpose of these circles.

A lot of people will argue, “But there are a lot of practices derived in paganism that are in use in the Church, such as the celebration of Christmas which comes from the Roman holiday, Saturnalia.” The difference is that the Catholic practice replaced the pagan version with its own holiday that does not incorporate any pagan practices or the worship of the god Saturn. Using a drumming circle (or yoga for that matter) is very different because it is not replacing the practice with something new but is merely placing a Christian veneer over the very same practice.

The bottom line is that drumming cirlces are founded in shamanism and were not designed to be used for praising God. They have a distinct spiritual component to them in that they are all meant to create some kind of trance or altered state of consciousness – a state which leaves us open to the direct influence of evil spirits. None of us needs to enter an altered state of consciousness to have a dialogue with Christ – which is the point of Christian prayer – and no matter where the drumming circle is being hosted, in or outside of a Church, a Christian should be very wary of participating in them.